Garden legacy of a great US philanthropist - Bok Tower, Florida

I've visited Bok Tower Gardens twice in the last couple of years, but have always been confronted with the most appalling weather - the first time it rained so hard that we had to take shelter (although the sun did eventually come out from behind the black clouds) and again yesterday, when the whole of this part of Florida was shrouded in a thick fog! But the gardens here are so outstanding that it's easy to forget the weather and appreciate them in all their glory.
Edward Bok was a Dutch immigrant, who made his fortune as an author and publisher. He once said: "Make the world a bit better or more beautiful because you have lived in it". And Bok Tower Gardens are proof that he took his own advice. Conceived in the early 1920s, the 130-acre gardens are very "beautiful", and give enormous pleasure to visitors from all over the world. They sit atop the highest elevation in Florida at nearly 300 feet, and provide a refuge for wildlife and visitors alike.
The gardens were designed by Frederick Law Olmsted, who is generally considered to be the founding father of American landscape architecture, and Milton Medary was employed to design the Singing Tower (pictured below), which rises to a height of 205 feet and has been described as "America's Taj Mahal". In the tower there are 57 bronze, carillon bells, which ring out during the day. The largest bell weighs over 11 tons, while the smallest weighs in at just 17 pounds.
When the gardens and Tower were completed in 1929, Edward Bok gave them to the American people and President Calvin Coolidge came to Florida with his wife to perform the dedication ceremony. They planted several of the cabbage palms (Sabal palmetto) - Florida's state tree - which are still there today. In 1993 the gardens were designated a National Historic Landmark. 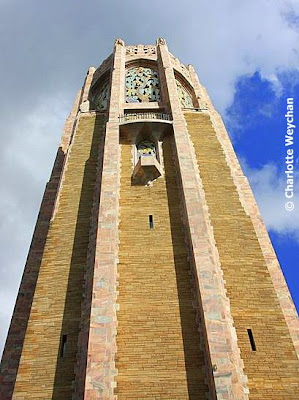 The gardens are really remarkable and include large areas of open space as well as densely planted, wooded glades where azaleas, camellias and magnolias thrive at this time of year, giving wonderful colour displays. There is also an impressive collection of palm trees, cycads, ferns and herbaceous border areas, which are reminiscent of British garden design.
There is also a nature observatory, called the Window by the Pond, which overlooks a stretch of water where visitors can sit hidden in a hut and observe the numerous birds, fish and small mammals in and around the pond, but remain undetected by the wildlife.

Adjacent to Bok Tower is the Pinewood Estate - a Mediterranean-style home, which is open to the public in the afternoons. Sadly, I couldn't stay to see the house or gardens because it doesn't open until midday. It is also closed on Sundays.

These gardens are really unusual for Florida, and it's not surprising that they attract nearly 200,000 visitors a year. John Burroughs, the great American naturalist and essayist, who played a role in the evolution of the US conservation movement, summarised his feelings about Bok when he said: "I come here to find myself. It is so easy to get lost in the world". I certainly agree with him. This is a far cry from the frenetic pace of nearby Orlando with all its major tourist attractions. 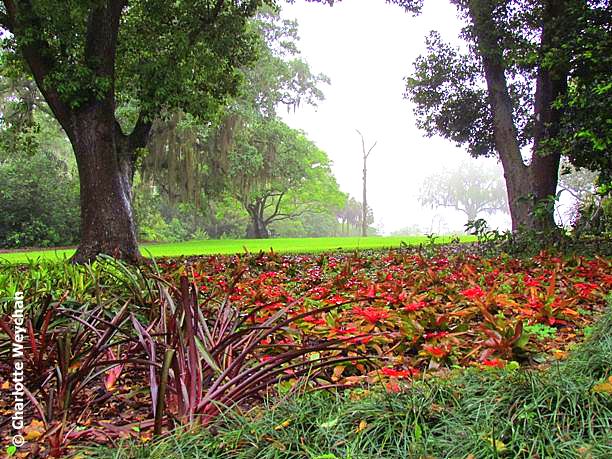