It's been a couple of years since I visited West Green House in Hampshire, created by garden diva, Marylyn Abbott, over the last 15 years. Marylyn has become a household gardening name, best known for her lavishly-illustrated books but has also created a unique garden at her National Trust home near Hartley Wintney, which opens to the public throughout the spring and summer months.
It all began in 1993 when Abbott acquired a 99-year lease from the National Trust for the 18th century manor house and six acres of grounds. She was certainly no newcomer to gardening and had already created an impressive garden at her own home in Australia - Kennerton Green - in the southern highlands of New South Wales. However, West Green House was her first major project in a climate that is both unpredictable and unforgiving, particularly in the winter months, although it's easy to see the similarities between the two gardens (click on link for slide show of Kennerton).
Part of the charm of West Green House is its many different garden areas - ranging in style from a magnificent decorative potager to a wildflower meadow, punctuated with interesting architectural features including a Nymphaeum, Victorian moongate and classical statuary to Marylyn's own modern touches: the Dragon and Alice gardens. And as former marketing manager to the Sydney Opera House, she's also introduced a summer opera season to the garden, which attracts a full house for every performance.

One of the most striking features of the gardens here is the abundant use of strong colours. The inner garden includes the walled garden, which provides a stunning visual display throughout the seasons and has been totally restored since Abbott arrived here.  Divided into two parts - a lawned area, with stunning herbaceous plants that change throughout the seasons and a potager with decorative fruit cages (above). Most visitors are so entranced by this section of the garden that they cluster here with camera in hand, but rest assured this is just one of many photo ops at West Green House!
Outside the walls, there's the impressive Nymphaeum with it's moongate entrance (above) and wide water steps and fountain designed by Quinlan Terry; the Paradise garden with its intricate rill and fountains; ponds traversed by bridges that lead to islands; the Alice Garden where you can have your own Mad Hatter's tea party (above), with its immaculately tended box parterre, and closer to the house, the green theatre and orangery (below). 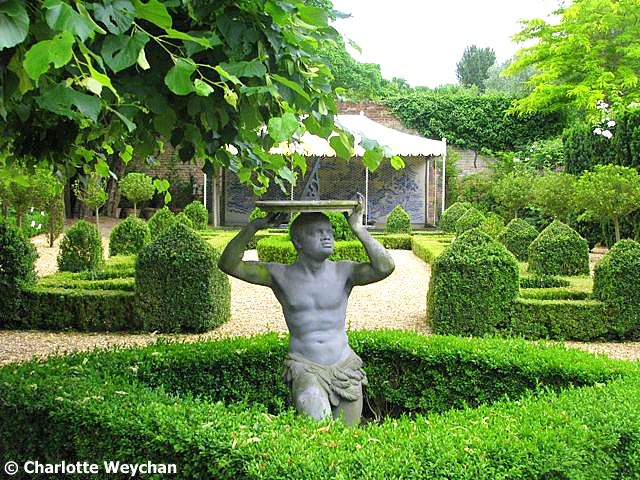 Its proximity to London makes this a favourite with garden visit companies and you can find yourself overwhelmed by ladies in search of lavender! Marylyn Abbot's book: 'The Resilient Garden' gives a real insight into the garden here and provides lots of innovative ideas for "planning and planting for unpredictable weather".