Drive into the sleepy village of Shepreth, just eight miles outside Cambridge and you'll be amazed to find two astounding gardens at opposite ends of the same street. The first, Docwra's Manor, was created by well-known plantswoman, Faith Raven and her husband, John, a distinguished botanist and author of "The Botanist's Garden". The second - The Crossing House - is the work of Mr and Mrs Douglas Fuller, who started out as amateur gardeners, but often sought help from their knowledgeable neighbours down the road. 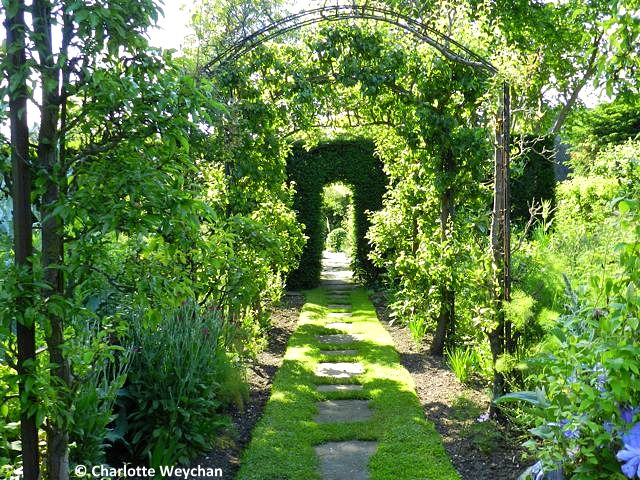 When the Ravens arrived here in 1954, there was no garden, but there were some fine trees and together the newleyweds created the plantsman's paradise that's open to the public today. The Crossing House, at the other end of the village, is a labyrinth of intricate planting right next to the railway line, which has evolved over the years, thanks to the gardening skills of the Fullers. Both gardens are delightful, but share many similar characteristics, although on entirely different scales.
Docwra's Manor has been on my Wish List for some time and I passed through on my way to Easton Walled Gardens a couple of weeks ago. It's open all year on Wednesdays and Fridays (10.00-16.00) and the first Sunday of every month from 14.00-16.00, March to November. Absolutely ablaze with colour and contour at this time of year, the garden was created by Faith and her husband around the very pretty house (top). They arrived here in 1954 when they were first married and spent the next 25 years creating the garden you see today, which is filled with interesting cultivars gathered during their forays into the Eastern Mediterranean over the years. John died in 1980, but Faith has carried on gardening here.
Faith Raven, who's an octogenarian, divides her time between her lovely Shepreth home and Ardtornish in Argyll, Scotland where she has a very different woodland garden.The whole family are gardeners and Faith's daughter, Sarah Raven is married to Adam Nicholson of Sissinghurst, and has her own astounding garden at Perch Hill in Sussex, which I visited last year. Average rainfall is very low in this part of Cambridgeshire, so the Ravens needed to find plants that could survive with little water, and planted rarer drought-tolerant plants alongside hardy English perennials.
I met head gardener, David Aitchison, who's a painter and sculptor when not at work at Docwra's Manor and he told me that gardening is remarkably similar to the fine art disciplines, when planning and planting. It is his skills, combined with Faith Raven's that have kept charming cottage garden vibrant and alive, with its subtle colour palette and interesting plant mixes.
The garden here is a delight - it's interesting, charming and absorbing, with different views at every turn. Deceptively large for two and a half acres, you can spend several hours here wandering through the various parts of the garden admiring the palette and enjoying an extraordinarily large collection of plants. There are areas of lawn and hedges that break up the crowded garden compartments. But overall there's a sense of gay abandon here and every corner you turn brings some new fascinating plant into view.
The Crossing House down the road is just as stunning. Located right next to the railway crossing, Margaret Fuller has created a plantsman's paradise within spitting distance of the passing trains. This tiny patch extends to just a quarter of an acre, but there is not an inch of ground where nothing grows. It is utterly charming. Open every day of the year, yet there is no entrance fee. I looked hard for a contribution box, but found nothing. The owners show this garden for love, not money and you'll enjoy it just as much as Docwra's Manor. 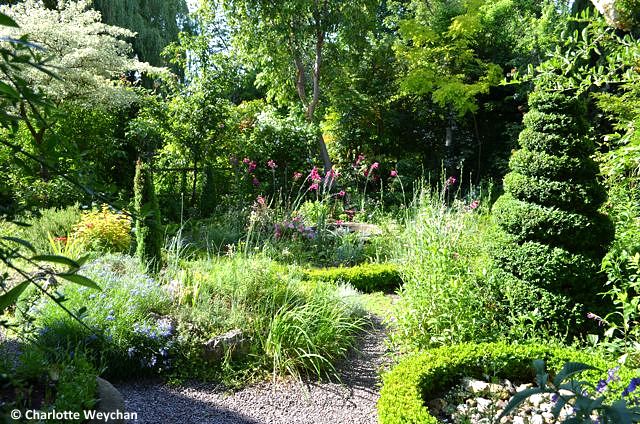 It's estimated that there are more than 5,000 plants crammed into this tiny plot, alongside little pools and an arbour in clipped yew. Topiary flourishes alongside a huge collection of alpine plants. You will be enchanted! Open daily, but make sure you park without causing an obstruction. You can walk from here to Docwra's Manor, or better still park there and walk the few hundred yards to this charming garden. Both gardens are delightful and compliment each other.