Following in royal footsteps in the gardens at Sandringham House, Norfolk 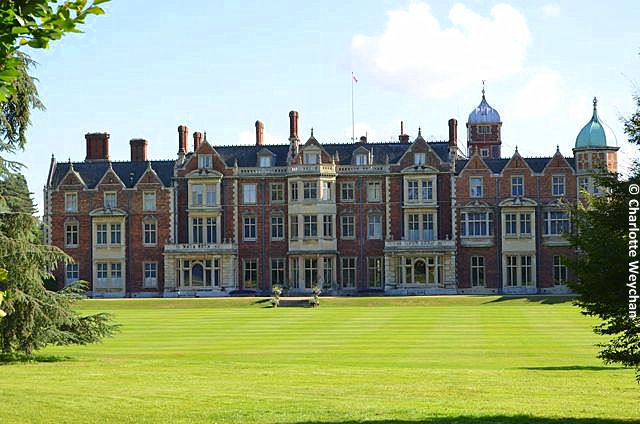 Sandringham House in West Norfolk, with its 60 acres of formal gardens and parkland, at the heart of a 20,000-acre estate, is not just a country retreat for the Queen and her family, but also opens to the public for seven months of the year, providing a royal landscape for all to enjoy. The formal garden to the north of the house was designed by Sir Geoffrey Jellicoe; William Broderick Thomas created the sweeping lawns and lakes; and the  Woodland Walk, famous for its rhododendron displays in May is the work of Sir Eric Savill, former head gardener at another much-loved royal landscape in Surrey – the Savill Garden.
The emphasis at Sandringham is on the landscape. It's a delightful place to walk and there are huge open spaces and many fine specimen trees; a charming formal garden designed specially for King George VI so he could see it from his rooms in the house; acres of impeccably kept lawn and a walled kitchen garden that provided all the vegetables for the royal kitchens in days gone by and which now opens to the public on Wednesdays and Fridays throughout the season. Sadly, I was there on the wrong day to see it.
This country retreat has been a favourite with the Royal Family favourite since its purchase in 1862 by Queen Victoria, although she bought it to lure the Prince of Wales (later Edward VII) away from the temptations of London! The large lawns are studded by memorial oaks that she planted, and King Edward VII came to love Sandringham and its landscape so much that he's reputed to have said that, given a choice of career, he would have become a landscape gardener. Today Sandringham is where the Royal Family spend Christmas and it is from here that the Queen makes her annual speech on December 25th.
The gardens at Sandringham are designed to have different highlights throughout the year, starting with a burst of colour in springtime with all the bulbs; followed by spectacular camellia and rhododendron displays; in summertime the trees and the lakes are the focal point of the estate, and there is a well trodden circular walk that visitors can enjoy, so they see the house and grounds from many different vantage points. In autumn, it's the changing colours that delight a rapt audience who wish to follow in royal footsteps. But in winter, the house and grounds revert to its owners, who enjoy a spell of privacy over the festive season.
Definitely a garden to visit if you're in this part of Norfolk - particularly if you're interested in trees. I saw some here that I couldn't even identify! Open daily from April until the end of October, from 10.30-17.00. Admission to the gardens and museum is £8.00 for adults and £4.50 for children (free to RHS members). There is a £2.50 supplement for the guided tours - available on Wednesdays and Fridays - which are walking tours of either the Woodland, Water or Walled gardens. And if you want to visit a very different garden locally during the summer season, head for Houghton Hall with its five-acre walled garden.