Kelmscott Manor - home of William Morris. A house and garden no Arts and Crafts aficionado can afford to miss!

Kelmscott Manor in Gloucestershire was the country home of William Morris and no Arts & Crafts aficionado can afford to miss this one, even though most visitors come to see the house rather than the garden. Many people make a special pilgrimage to this property because of its connection with the founder of the Arts and Crafts movement, and the garden has all the hallmarks - a vine-clad pergola, tiled summer house and stone-flagged pathways - but the magic is here, and it would be harder to find a more perfect country idyll - the very reason that Morris chose it.
William Morris lived here from 1871 until his death in 1896 - he was a poet, calligrapher, printer, lecturer, writer, craftsman and above all a pattern designer - and when he first saw the property, he completely fell in love with it. Enclosed by high walls and divided by hedges, which was his ideal for a garden (see below), he wrote to his great friend Charley Faulkner in the May that he saw it, saying that he had found "heaven on earth". And in the last 25 years of his life, he wrote constantly about his home, because it symbolised the perfect lifestyle to him.
Morris had no idea what a profound influence he would have on gardening in the post-Victorian era, but once wrote: "Large or small, it (the garden) should be orderly and rich. It should be well fenced from the outside world. It should by no means imitate either the wilfulness or the wildness or Nature, but should look like a thing never to be seen except near the house. It should in fact, look like a part of the house." And it is this credo that came to be reflected in later examples of Arts & Crafts gardens.
Kelmscott is an Elizabethan manor house at the heart of a tiny Cotswold village, yet it has become a shrine to William Morris. After his death his daughter May continued to live here for a further forty years and she bequeathed it to the University of Oxford. The garden was eventually restored in the 1990s under the stewardship of well-known garden designer, Hal Moggridge, who was committed to making a garden that was representative of Morris' ideas, based on paintings and drawings that survived from his collections. 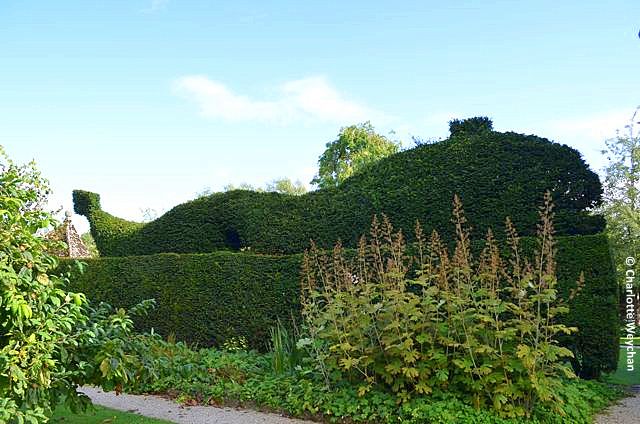 The garden is completely surrounded by stone walls and the entrance (top) bears a close resemblance to the drawing on the frontispiece of Morris' "News from Nowhere" (below left), published in 1892. A flagstone path flanked with roses runs across the lawn to the front door and there is a curious topiary dragon to the side of the house, shaped by William Morris himself - the 'Fafnir' of his Icelandic poems. The Lawn Garden at the rear of the house was once a kitchen garden, and it is here you'll find the pergola of coppiced chestnut. There is also an orchard, replanted with traditional Victorian varieties of apple an plum. 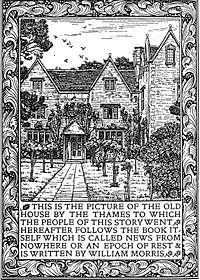 Kelmscott Manor is now owned and run by the Society of Antiquaries, who took over the running of the property when the University of Oxford could no longer raise sufficient income from renting out the manor house. It undertook all the major restoration work at the manor, with the help of William Morris' own Society for the Protection of Ancient Buildings. The house has been preserved just as Morris left it and is filled with his furniture and fabric designs.

It is only open on Wednesdays and Saturdays, from April to the end of October (11.00-17.00) and admission to the house is restricted by numbers when it's busy. Cost is £9.00 for adults and £4.50 for students/children. Free to HHA members. Well worth combining with a visit to Rodmarton Manor if you are in the area, since it is a short drive away and is definitely one of the finest Arts and Crafts gardens in the UK. Another good example is Snowshill Manor, which is also within easy reach.