There's little doubt that winter's on the way when English gardens close their gates and the mists start rolling in off the sea and leave us swathed in gray until mid morning. So as part of my ongoing series of "gardens for all seasons" that remain open throughout the year, today's post is about Sheffield Park in East Sussex. This magnificent garden always comes to light at this time of year because of its stunning autumn colours, but in reality, it's a wondrous garden throughout the year and is only closed on Christmas Day.

It's the huge expanses of water and the planting around the lakes at Sheffield Park that makes this landscape so memorable because you get wonderful reflections, particularly from the maples and scarlet oaks at this time of year. There are no formal beds of herbaceous borders here, since this is primarily a woodland garden, but in springtime, there are masses of rhododendrons and azaleas, which give as good a display as the autumn colours. 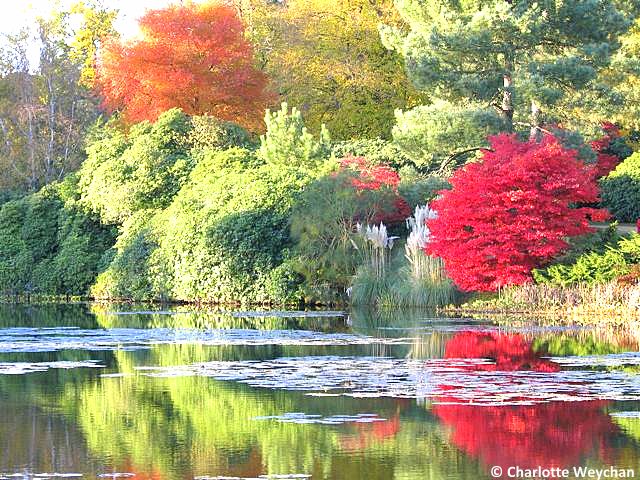 Both Capability Brown and Humphrey Repton worked here after the property was acquired by the Holroyd family in 1769. But today's planting is largely due to Arthur Soames, who purchased the estate in 1909 and embarked on a major planting programme and built up a magnificent collection of exotic trees, conifers and shrubs suited to the acidic soils found here. He also extended the top lakes and called in Messrs Pulham, who created the Rock Garden at RHS Wisley, to build the cataract between the top and second lake.
In winter too, the scenes are spectacular, particularly if a big freeze comes like in the winter of 2009/10 and the lakes ice over, giving an eerie silence to the garden because the water in the lakes stops flowing (above and below). But Sheffield Park is still stunning in wintertime because Arthur Soames planted so many evergreen trees so there is always something to see here. Definitely a garden for all seasons. When spring comes, life begins again at Sheffield Park as the daffodils and bluebells arrive. They are followed by spectacular displays of rhododendrons (below) - once again reflected in the lakes. Virginia Woolf, who lived at nearby Monk's House, described them as "massed upon the banks ... and when the wind passes over the real flowers, the water flowers shake and break into each other."

The National Trust acquired several hundred acres of the gardens when the estate was broken up in the mid 1950's, although the house remains in private ownership. It has now become one of their flagship garden properties and attracts record numbers of visitors each year, particularly in the autumn. For other suggestions on spectacular autumn gardens to visit, use this link. 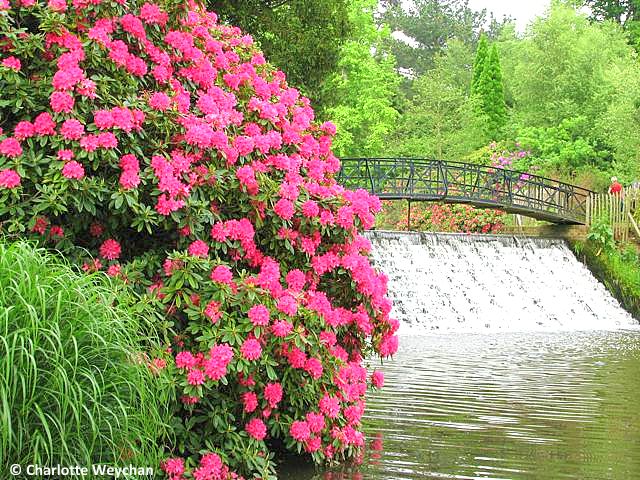 Sheffield Park is open throughout the year every day except 25 December, from 10.30 to 17.30 until 31 October, and 16.00 from 1 November. Admission is £8.10 for adults, £4.05 for children, and free to National Trust members. Do try and get there early if you're planning to see the autumn colours, because the car park can get very full on sunny days and you may have to queue to get into the parking areas.
Labels: Capability Brown East Sussex Seasons Sheffield Park The Galloping Gardener UK Garden Visits