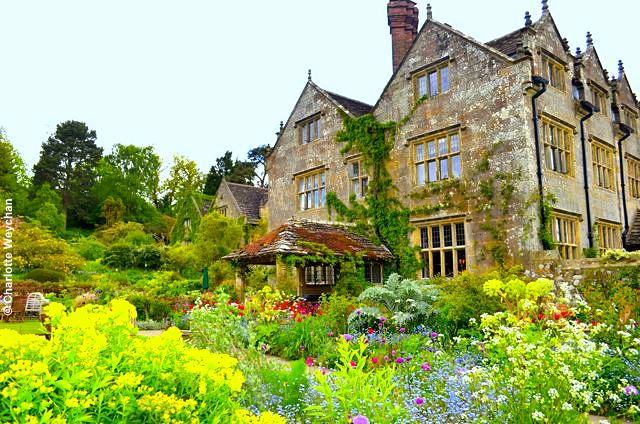 Tom Coward arrived at Gravetye Manor just five years ago, but has achieved remarkable results during his time as head gardener there. He has not only embraced the challenge of restoring William Robinson's former garden to its former glory, but has worked hard with the new owners of the property to find the right balance between allowing the planted areas to progress, while preserving the history and the unique planting style championed by Robinson, who was a vocal and committed advocate of "wild" gardening.

William Robinson was a somewhat enigmatic figure - a distinguished horticulturalist who wrote prolifically during his 98-year life - and who championed the idea of "wild" gardening and naturalisation of bulbs in both his writing and his own garden at Gravetye. His best-known books: 'The Wild Garden' (published 1870) and 'The English Flower Garden' (15 editions published between 1883-1933) had a huge influence on other gardeners at the time, yet there are no great gardens attributed to him except the one he created at his manor house in Sussex.

Tom is no newcomer to gardening or writing and contributes a regular column to Country Life. He came to Gravetye from Great Dixter, where he had worked previously with Fergus Garrett and became well-acquainted with abundant perennial flowerbed planting schemes and wild meadows. He arrived shortly after the hotel was bought by Jeremy Hoskings, who saved it from receivership in a last-minute buyout in 2010.

When I first interviewed Tom in 2011, as he was settling in to his new post as head gardener at Gravetye, a five-year plan had already been formulated for the gardens, which included restoration of the unique elliptical walled garden and Victorian glasshouses; the planting of many new trees; installing a new pergola and planting thousands of bulbs to allow them to naturalise in Robinson style. His hard work has paid off and today the garden provides seasonal colour and a flowering palette that appears effortless. And although the credit for the gardening goes to Tom, he is adamant that no restoration or progress would have been possible without commitment from the owners, who see the garden as a vital part of the guest's experience.
In reality, this look could never be achieved without the tireless efforts of a team of gardeners under Tom's stewardship. It helps that the owners are firmly committed to restoring the gardens and have had the vision to draw on a number of research sources to reinstate the original Robinson look. Tom has been actively involved in searching archives around the country to find photographs and paintings showing how the gardens looked in Robinson's day, and referred to paintings by Alfred and Beatrix Parsons, which had been particularly helpful during the last five years with reference to plant choices and placement.
William Robinson moved to Gravetye in 1884 and lived there for the remaining 51 years of his life, devoting his time to creating a well-planned naturalistic garden from the surrounding acres of woodland and pasture, by planting mixed perennial borders and using ground cover plants to hide bare soil areas. He was well known for his dislike of the prevailing 'landscape' movement and wanted his garden to be full of flower combinations, with what appeared to be "wild" planting and drifts of colour.
Today the owners are determined to recreate the original Robinson look and Tom Coward is well-equipped to carry out their vision. He agrees that he has an easier job than his predecessor with the wide range of plants available from modern sources, but there were teething problems at the outset because years of neglect meant that the beds adjacent to the house had to be replenished and replanted - no easy task with a constant stream of hotel guests wanting to enjoy the quintessentially English garden on their doorstep.
Part of the challenge that he most enjoys is the hotel element of the property. "We're never closed", he says, "but the real joy is seeing guests use and interact with the garden". He is also deservedly proud of the walled garden, where all produce is used by the restaurant and flowers are cut daily for the manor. Not surprising therefore that his gardening team has doubled since he arrived at the manor with so many new projects in progress.
Training is another important part of the garden philosophy at Gravetye. Tom has a constant throughput of trainees from various different schemes including the Historic Botanic Garden Bursary. He enjoys having them on site because he says it's rewarding to see their enthusiasm and how they develop in the unique garden environment he oversees. He thrives on their constant desire to learn and improve and feels that the garden is a particularly good training ground because there are so many different components to it -flower beds and borders, an orchard, meadows, the walled garden and the greenhouses - affording the opportunity to see diversity in the workplace and acquire different skills.
Ask Tom what his favourite local gardens to visit are and he will tell you: Great Dixter, Prospect Cottage and Sussex Prairies. If you would like to visit Gravetye Manor, but have no plans to stay there, the best way is to have afternoon tea. You can then wander the garden at your leisure. Alternatively, head for the William Robinson Festival on Saturday, 4th July from 10.00-16.00. Tickets are £15.00 and all proceeds go to the Chestnut Tree Children's Hospice.
There's little doubt that Tom is doing an amazing job at Gravetye and I certainly look forward to seeing what happens there in the next five years.
Labels: Best British Gardens Gravetye Manor Sussex Gardens The Galloping Gardener Tom Coward William Robinson
Location: Gravetye Manor, Vowels Lane, East Grinstead, West Sussex RH19 4LJ, UK