Oh to be in England ... 10 of the greatest spring and early summer gardens around the UK

There's nothing quite like an English garden in springtime, so in my first post for a long time, I'm highlighting some of the properties that are really worthwhile visiting before the end of May if you possibly can. Special emphasis is placed on properties that are members of the Historic Houses Association (HHA), because you will cover your membership (£50.00 per year) by visiting more than five properties in a year, so well worth joining if you're an avid garden visitor. 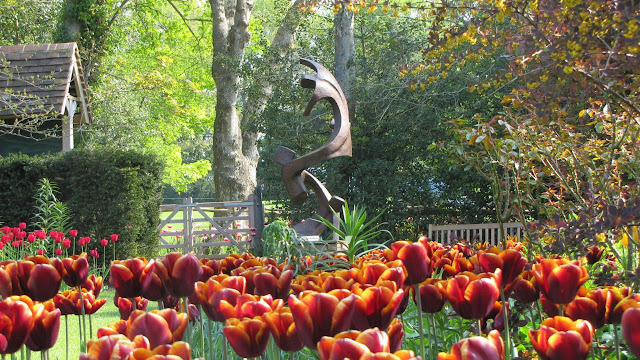 The best show of tulips anywhere in the South East surely goes to Pashley Manor (above) in East Sussex, which holds an annual Tulip Festival in the spring. It has just started (24 April) and runs until 8 May, open from 10.00-17.00 daily. But although Pashley is a member of the HHA, you cannot use your membership during any special event, so you will have to pay the full £11.00 to get in, but it's well worth it for the spectacular displays of tulips on offer.
Borde Hill in West Sussex is another notable spring garden, with its fantastic magnolias, followed by rhododendrons - well worth a visit at any time during the open season, but particularly stunning in springtime when the magnolias are in flower and the summer months as the roses bloom. Free to HHA members; opening hours are 10.00-17.00 daily and 18.00 at weekends. 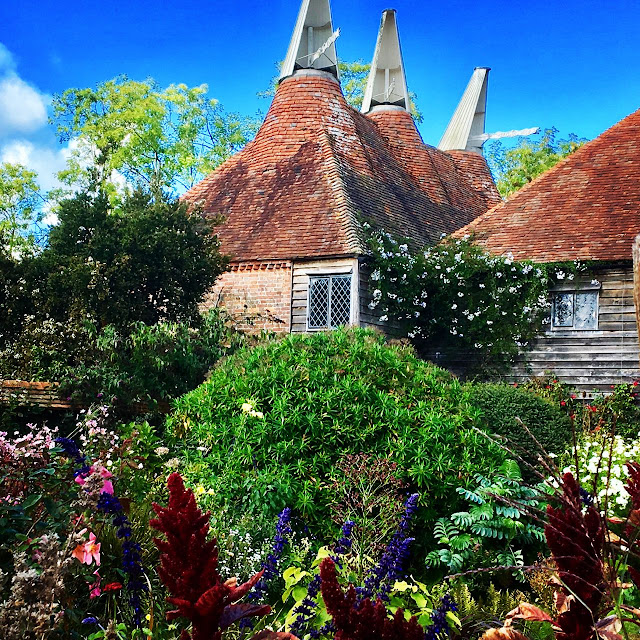 Great Dixter, former home of champion gardener, Christopher Lloyd (above) is another one for the wishlist if you want swathes of colour in springtime (and indeed, throughout the summer). The garden palette changes constantly under the stewardship of Fergus Garrett and you will be astounded by just how many plant combinations there are in a single garden. Open Tuesday to Sunday and Bank Holiday Mondays, it's well worth making several trips to see how the garden transforms throughout the seasons. Free to HHA members. 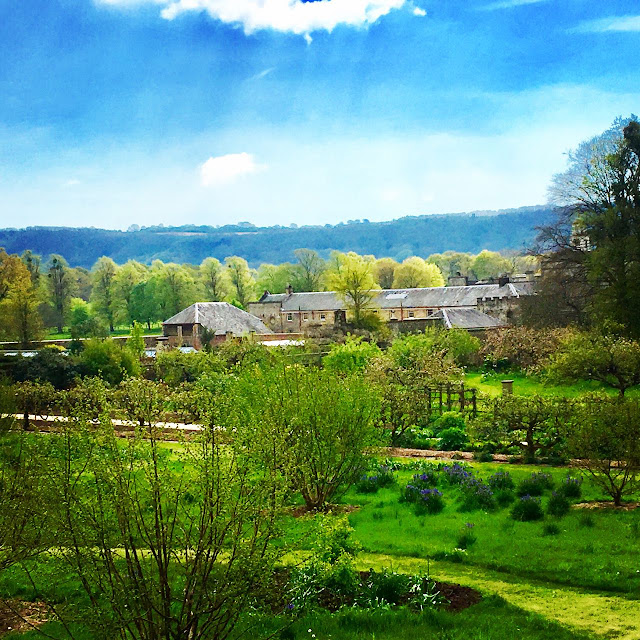 Parham House in Sussex - another must see - with its fabulous walled garden and pleasure grounds. Starting with a riot of tulips in April and May, this is garden notable for its colour scheme and ebullient planting, set against the backdrop of an Elizabethan house that's open to the public.  Make sure you climb the viewing platform for the best views! Open on Wednesdays, Thursdays, Fridays, Sundays and Bank Holidays, with admission to the gardens starting at midday and to the house at 14.00, Parham is another HHA property, so free to members. 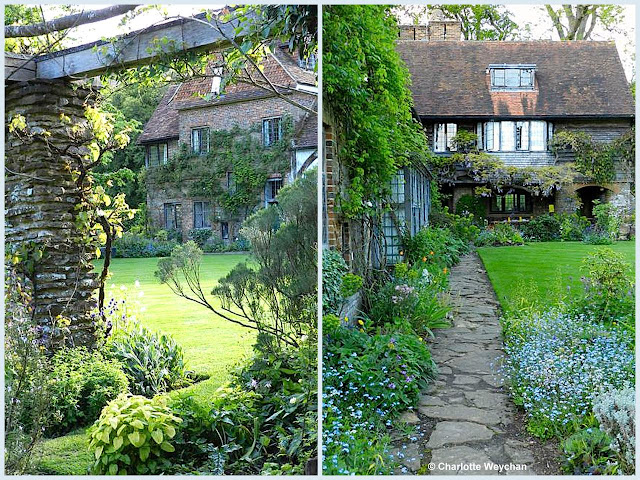 Not to be missed if you're in or around London is the Gertrude Jekyll garden, surrounding a magnificent Arts and Crafts house at Vann (above), near Godalming in Surrey. Lovingly tended by owner, Mary Caroe, who is often to be found in the garden, it opens on Wednesdays from April until the end of June - 10.00-18.00. Notable features besides the planting include the water garden and the pergola. 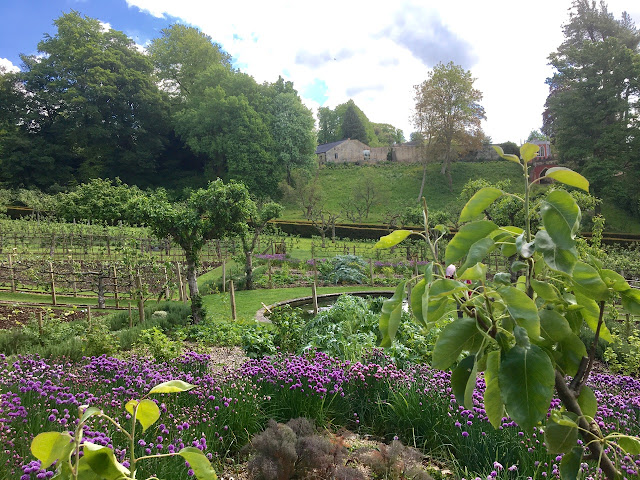 Moving further west,  Painswick Rococo (above), as its name suggests, is unique and is the only garden of its kind in England. It is set in a valley and boasts impressive flower and fruit displays throughout the season. It is also steeped in history and with its enviable position in the heart of the Cotswolds, this HHA property is definitely one for a visit if you're in the area. Open daily until the end of October from 10.30-17.00. 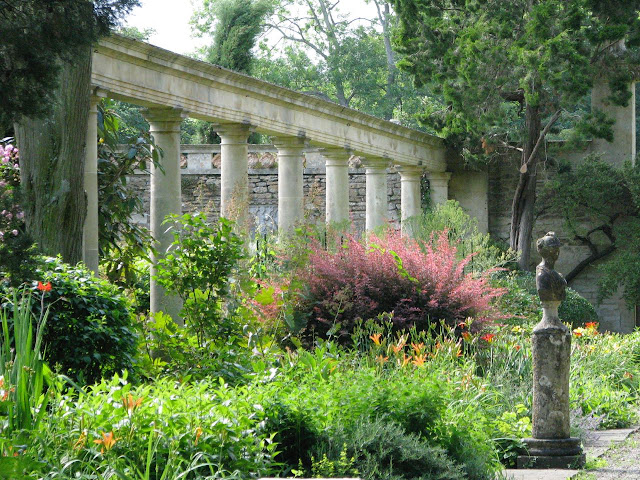 Iford Manor (house not open to the public) in Wiltshire has a garden laid out by Harold Peto, who lived there for several decades after he bought the house in 1899. It is another unique property, where an Italianate garden (above) is laid out over terraces, and statuary abounds. It has been restored by the current owners and now hosts an impressive Arts and Opera programme throughout the summer months. Open Wednesday to Sunday, as well as Bank Holiday Mondays from 11.00-16.00 and free to HHA members. 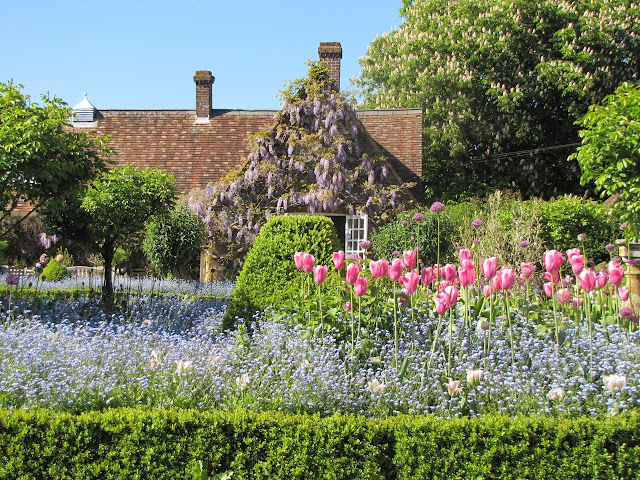 To the north of London, Chenies Manor has tulip displays to rival Pashley Manor, but is free to HHA members throughout the season. Openings are restricted to Wednesdays and Thursdays between 14.00 and 17.00 so it can get very crowded, but still worth a visit if you're in the area. 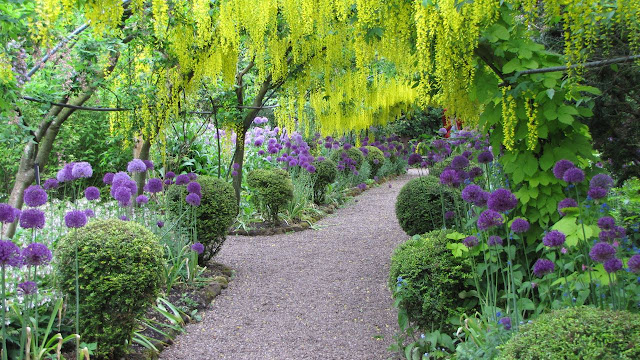 Head north from here and make a special stopover at the Dorothy Clive Garden if you want to see colour displays that will astound you. Rhododendrons really flourish here and will leave a lasting impression on you. And the laburnum archway (above) is one of the best in England, so make sure you visit early in the season. This is the only garden here that is not an HHA member, but it's well worth paying the entrance fee. Open daily from 10.30 to 17.00, admission is £8.50 for an adult. 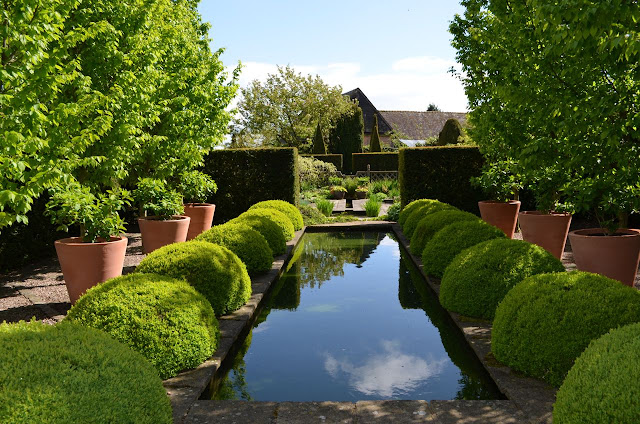 And just around the corner is Wollerton Old Hall, near Market Drayton (above), which has to be one of the jewels in the HHA crown, with its magnificent series of Arts and Crafts-influenced garden rooms that change throughout the seasons, starting with amazing tulip displays in springtime. But here too, opening hours are restricted to 12.00-17.00 on Fridays and Sundays throughout the season, and Thursdays during high summer.

Visit any of these gardens in the next few weeks and you won't be disappointed!

All photographs are subject to copyright.If you wish to use them, please contact the author direct at: thegallopinggardener@gmail.com