Sri Lanka is a plantsman's paradise. Located at the tip of India and hanging like a tear drop from the mainland, it offers lush green landscapes, leafy vistas and acres of forest where elephants roam free. The whole country is a garden, fringed with perfect beaches and populated by smiling locals. Foreigners have formed an integral part of its long history and it was variously colonised by the Portuguese, Dutch (very briefly the French) and the British. Ceylon, as it was previously known, only gained independence in 1948 and became Sri Lanka in 1972, but then became the battle field for one of the worst civil wars in history, which left the country in ruins. The war only ended in 2009 and the country is still re-shaping itself, but is now one of the most popular holiday destinations in the world. 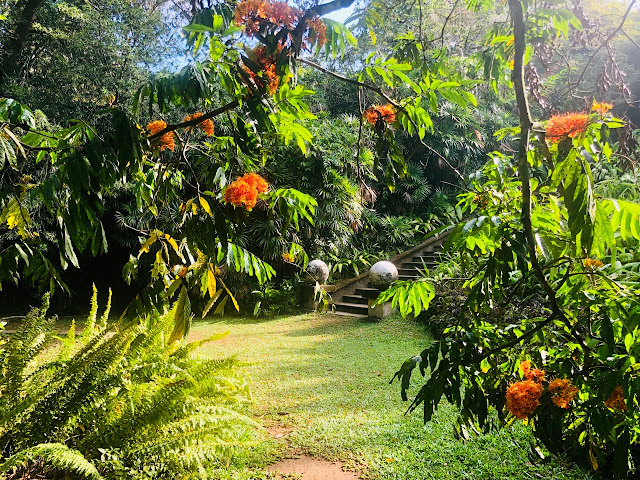 But this troubled history did not deter plantsman nor gardeners. Sri Lanka has historically produced fruit, vegetable and raw material crops that are unrivalled and there are man-made gardens too that draw visitors from around the world. These include several state-run botanical gardens (to be reviewed separately), showcasing the island's extraordinary range of plants; and two legendary private gardens created by well-known brothers - Bevis and Geoffrey Bawa - just a few miles apart from each other on the West Coast. The Brief Garden near Bentota was Bevis' brainchild, while Lunuganga is the former home and work of his brother, Geoffrey, the best-known of Sri Lanka's architects. 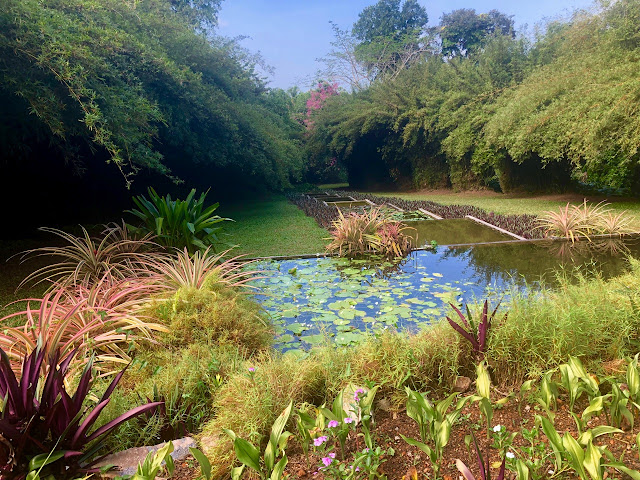 But it is Brief that won my heart this year - with its flamboyant planting and landscape features; skilful use of available space; and the clear signature of the openly gay and eccentric man who created it - Bevis Bawa. The site was originally a rubber plantation and Bevis moved here in 1929, when he was just 20. It is called "Brief" because his father purchased 200 acres of land as a result of a successful legal brief. Bevis, who did nothing by halves - even as a young man - built his home on the highest point of the property and then carved out his landscaped garden using just five acres of the plantation and leaving the rest as jungle. 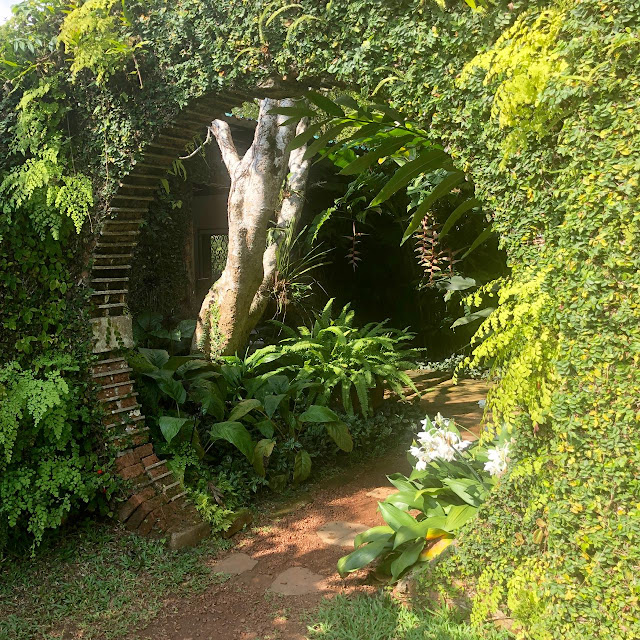 If you want to visit Brief, take a tuk-tuk from Bentota, because it's a delightful ride through the countryside and the road meanders through small villages and paddy fields, past shops and local ladies trudging along in the heat with their ubiquitous black umbrellas providing shade from the sun. When you arrive at the garden you encounter a striking black and white front door, characteristic of all Bawa architecture, set into a startlingly-bright sunflower yellow wall (top). 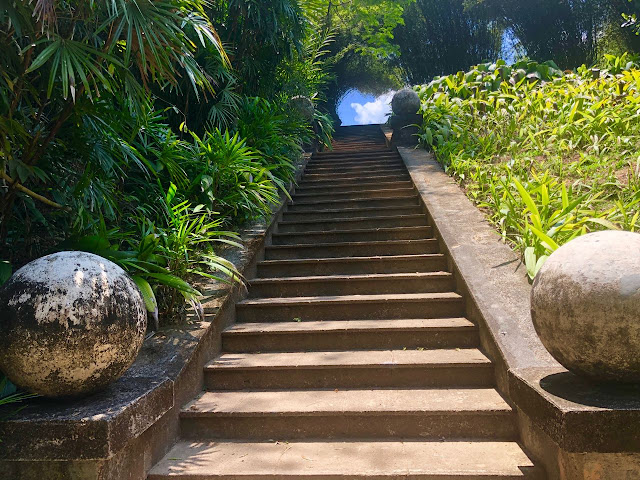 If you're the only visitor, you may wonder what to do next, but don't worry, there's a bell by the door. Ring it during opening hours and someone will soon appear and sell you an entrance ticket for 1,000/- SLR, show you to the garden gate and then leave you to wander at leisure through the garden. Once inside you meander along jungle paths and encounter a grandiose Italianate staircase, hidden ponds and secret seating areas; erotic statuary  is everywhere; a Japanese moongate (above) graces the back of the house; and as you wend your way, you'll encounter numerous exotic plants and trees that make you wish you knew more about Sri Lankan botany. 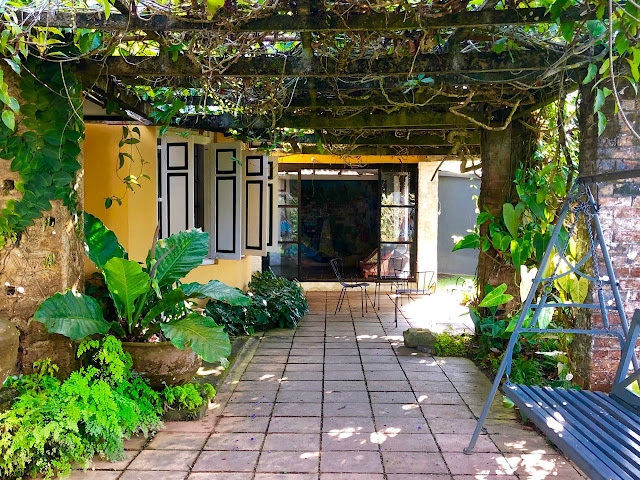 The house is also open to visitors and if you're lucky, you will meet Dooland de Silva, who has lived at Brief and curated the house and garden since Geoffrey's demise in 1992. He worked alongside Bawa for many years and helped create much of what you see there. He's a softly-spoken gentleman who is happy to answer your questions about the garden and the plants, but also a well-known landscape gardener in Sri Lanka, with many ongoing projects that take him away from Brief on a regular basis. 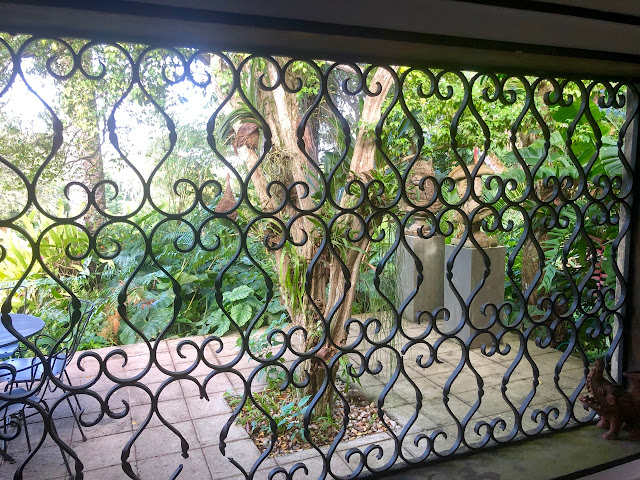 Once inside Bevis' home, you will be struck by its simplicity. Every room is simply furnished in plain colours. It is the doors, shutters, carefully chosen furniture and artwork that make the impact on the eye. Every window has a striking vista of the garden, and the embellishments like the grill (above) serve to emphasise the effect of the view. "Less is more" is an apt description of this peaceful property, surrounded by its stunning garden. But don't overlook the artwork - it's an eclectic collection of photographs of Bawa family life mixed with modern and traditional paintings and drawings. 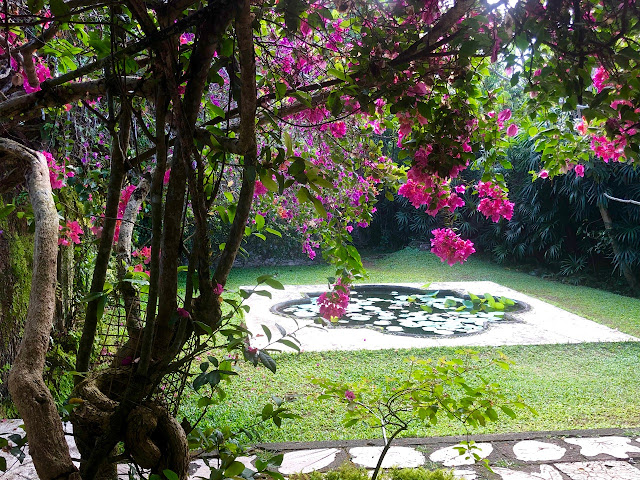 Don't miss the rear of the house, with its charming sheltered balcony and garden (above) and the moongate leading to Bevis' private bathroom, known as the "Room with a View". Brief is open throughout the year from 8.00 until 17.00 (check website for details). Go early in the day to avoid the intense heat during the summer months and remember to take water with you.
Labels: Bentota Bevis Bawa Brief Garden Dooland de Silva Great Gardens of the World Sri Lanka Sri Lanka Gardens The Galloping Gardener Tropical Gardens
Location: Brief Garden, by Bevis Bawa, Brief Garden Kalawila Village, Beruwala 12070, Sri Lanka