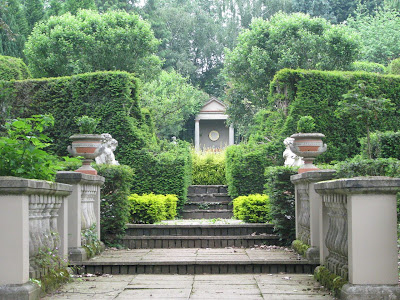 There are several gardens in England that I have always wanted to see, but public access to them is virtually impossible - they include Sir Roy Strong's garden - the Laskett, in Herefordshire - and Highgrove, belonging to Prince Charles.  The first I have been lucky enough to see and I thought I'd feature it before leaving to explore gardens in Florida. The second remains on my wish list.
The Laskett is a remarkable garden, which reflects the charming eccentricity of its owner, Sir Roy Strong and his late wife, Dr Julia Trevelyan Oman.  There was no garden at all when they bought the house back in the 1970's and they spent many years together making it what it is today - a unique and theatrical garden, which demonstrates the personality of its makers. 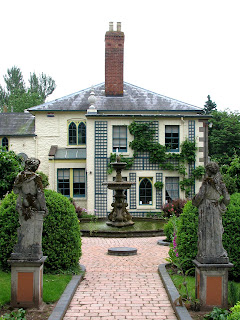 Even the house (left) which is built in an unremarkable style, has been made to look interesting, thanks to the artistic talents of Sir Roy and his late wife.  They have made a feature of the blue trelliswork that supports the climbers and their clever use of pathways and statues as focal points, means that the eye is directed to the better parts of an otherwise ordinary piece of British architecture.
The Laskett is split into a series of garden rooms and when you visit, it is Sir Roy that shows you his masterpiece, and takes you from set to set, explaining how it came to be and why there are so many unusual features. Much of the naming and planting is due to his late wife's connection to the theatre, since she was a movie and theatre designer, so there are named areas including the Covent and Nutcracker Gardens and Glyndebourne; the Sheakespeare Monument; and the Schonbrunn and Arabella Orchards. 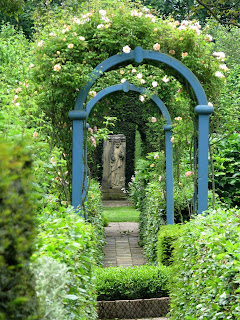 You can only visit The Laskett if you join a tour group like those organised by Border Lines, but this is no great hardship because this company is run by a charming Englishman, James Bolton, who is extremely knowledgeable and a garden designer himself, so he has hand-picked all the venues featured in his programme.  I would never have seen this garden without joining a tour and was extremely happy when a client cancelled at the last minute so I was able to take their place.
The Laskett is undergoing great change at the moment because Sir Roy fell foul of box blight, so some of the vistas shown here may have altered, but do visit this garden if you get the chance, because it must surely be one of the great British gardens that will go down in history. And if you can't get to visit, Sir Roy Strong's book, The Laskett: The Story of a Garden, is well worth reading, because it tells the whole story of how this garden came to be and has wonderful photographs that make you feel as though you are there.
Labels: galloping gardener Sir Roy Strong The Laskett