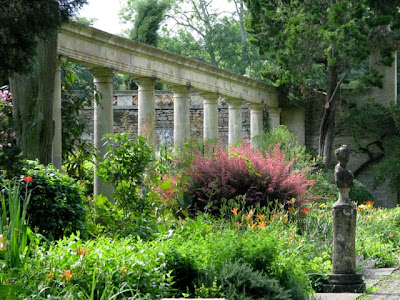 The Peto Garden at Iford Manor is an English garden that you can't miss - it's like something from a dream. I had it at the top of my list for several months before finally getting there and I'm glad I made the effort, because it's outstanding!
Nestling on the side of a steep valley near Bath, the honey-coloured Manor house sits near the river Frome, and the garden rises behind in a series of terraces, filled with surprises. You enter by a simple garden gate and then the show begins! This garden is a masterpiece, with its magnificent cypresses and junipers; its columns, fountains, marble seats and statues - and all in 2.5 acres! You wander through this theatrical feast and wonder just how long it took Harold Peto to make this extraordinary Italianate spectacle in the middle of nowhere. 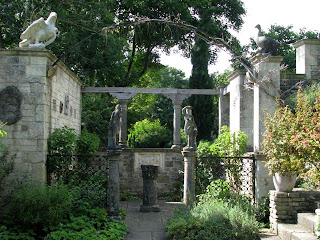 Harold Peto trained as an architect in the same offices as Edwin Lutyens, but he did not become really interested in gardens until he was in his forties. He bought Iford Manor in 1899 and spent the rest of his life making the remarkable garden that is there today. Much of the stonework came from Italy, as did the inspiration that prompted him to include cloisters, loggias, statues and urns, many of which he shipped home from his travels in Europe in his post-architect years. 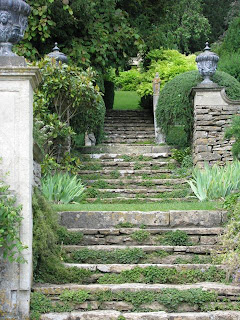 Harold Peto also designed the gardens at Buscot Park and West Dean, but it is here at his home that he excelled himself. The steep terrain means that he has used every inch of the hillside to display the finer features of the garden and as you climb the steps (left) a different vista unfolds at every stop, but equally impressive are the views over the valley below. Tucked away at the back of the garden is a Japanese garden.
This magnificent garden is also used as a concert and opera venue throughout the summer months and I cannot imagine a more spectacular place to enjoy music on a balmy English evening, with the backdrop of an Elizabethan manor house and views over the valley. This is a garden where time stands still and you feel that you have stepped back a hundred years - don't miss it! 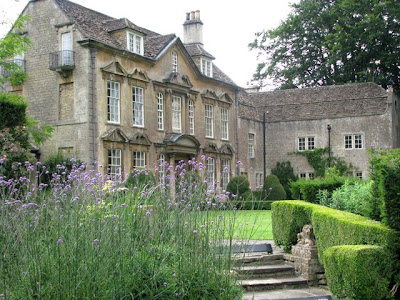 And if you're in the area, combine this with The Courts at nearby Trowbridge. This is another lovely manor house, surrounded with more than seven acres of gardens, including a rectangular lily pond with spectacular irises. You walk through the gates and see the manor house (above) and then wander through the various different areas, which include an arboretum, formal and water gardens. 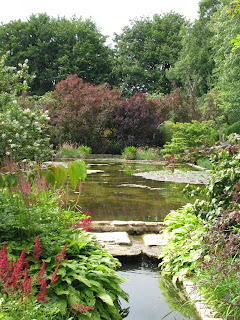 The Courts is very low key, but not to be missed. It was given to the National Trust in 1943 and has been well restored over the years, and carefully planted to create the beautiful, peaceful garden that you see today.
Particularly impressive at The Courts is the topiary - immaculately clipped box (below) - that looks a bit like ice-cream beginning to melt in the sun; the water garden (left) with its stepped runnel and the pond shaded by a swamp cypress, but which bursts into colour when the water lilies open. It is here that you get a wonderful iris display in springtime.
If you plan to combine the two gardens (and it would be crazy not to, since they are just a few miles apart), do check the opening times. Iford Manor is only open from 2-5 and is not open on Monday or Friday; The Courts is open daily, but not on a Wednesday, so don't make the mistake that I made and arrive mid-week. In my case it didn't matter because I was visiting other gardens in the area (to be featured later), but if you've travelled a long way to see these two lovely gardens, you don't want to miss one! 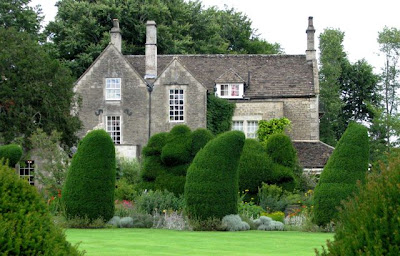