Last tales of the Taj - Part I 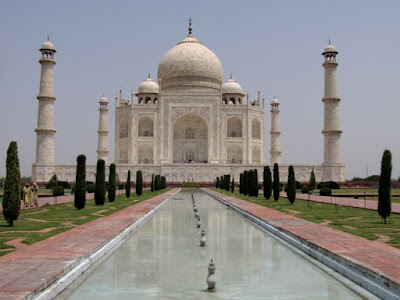 Garden visits take on an altogether different meaning in Rajasthan, India, particularly at this time of year! It is monsoon season and the gardens, are for the most part, green and glorious, but the heat remains a challenge!
I have spent the last two weeks in Rajasthan, working on my hospital scheme for the village people near Udaipur - The Raven Foundation - but have also managed to fit in several garden visits, and quite a few birdwatching trips. Both the gardens and the birds in India are very different from what we find at home, either here in the UK or in the continental US, so it has been an interesting trip for me. But what is so striking about rural Rajasthan at this time of year is the unending vista of green, thanks to the monsoon.
My travels took me from Delhi to Agra and the Taj Mahal (above) and then on to Jaipur, Udaipur and Dungarpur. The first three are all on the well-trodden tourist beat, but the last is a little different and it was there that I got to see not just green vistas, but some of the most remarkable birds I have ever seen, including sarus cranes (below), various different storks, many wildfowl, hornbills and many smaller birds that are only found on the Indian subcontinent. 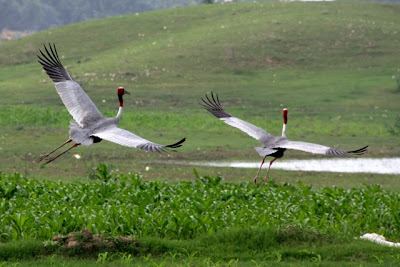 The sarus crane (grus antigone) is a bird that I have been hoping to see for the last five years in my frequent trips to India and the far East - it is the tallest flying bird in the world at 1.65 metres (5' 5") and is actually the same height as me! 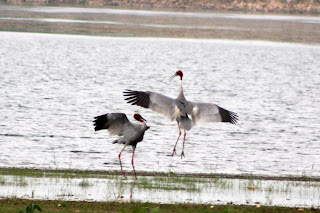 But it is also one of the most graceful birds I have ever seen, and I was lucky enough to see one pair perform their courtship dance (right), which involved a series of finely choreographed movements at the edge of a lake. I saw many other large birds during my recent travels, although there is little doubt in my mind that the most unusual and spectacular was the painted stork (Mycteria leucocephala) seen below, which was standing just yards from the dancing cranes. This is a smaller bird than the sarus at just under three feet tall, but it still makes an impressive sight with its black and white barred wings, yellow bill, bare reddish face and striking pink legs (below).This is just one of the many great storks you'll find in southern Rajasthan, which is a birdwatcher's paradise. There are also black-necked and black storks, open-billed and white storks ... but more of that in my next entry, because I am now heading home to England and will catch up when I finally get there! 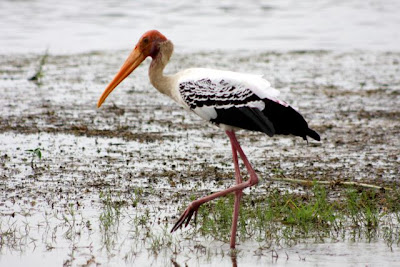