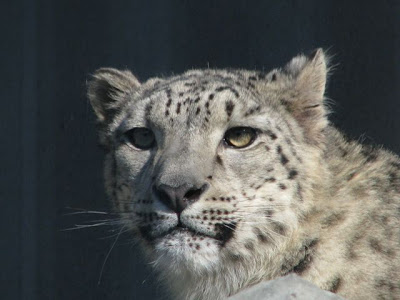 Today the sun was shining - one of those beautiful, clear autumn days, with a chill in the air, but magnificent light - so I thought I'd visit a couple of gardens with my husband, that reflect this season so well. But en route to two that I've been wanting to visit for many months, I stopped for fuel and happened to see a brochure for The Rare Species Conservation Centre , and when I saw they had snow leopards, plans for autumn colours went out of the window!!
I have never seen a snow leopard, but my travels to India have taken me to Ladakh, where the snow leopard is one of the creatures that one hears about, and hopes to catch a glimpse of. I've never been that lucky, but like many of us, I've seen documentaries about their decline and the problems they face in the modern world as man encroaches on their territory. 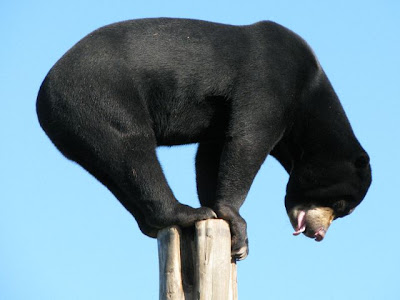 The centre is just outside Sandwich in Kent and is worth making a special visit to see because it has the most extraordinary range of rare species on offer beside the snow leopards - bears, otters, tapirs, panthers and several endangered bird species - 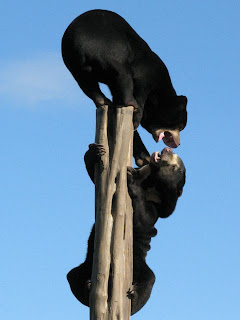 to name but a few. It is quite simply the most remarkable find and I'm really glad we went there. It's quite unique in that it's not a great sprawling zoo, but a small complex covering a couple of acres and staffed with keepers who are knowledgeable and willing to talk to you about the creatures in their care.
It is sympathetically constructed so that all inhabitants live in replicas of their natural habitats, right down to the planting of the bamboo and palms. There's no suggestion of animals looking woefully at you through glass and we were treated to some wonderful displays, like the antics of the bears (right) who frolicked and fought on their pole in front of us for a good 15 minutes while we watched ..... mesmerised.
We'd intended to visit the Salutation Garden in Sandwich today, but were so amazed by the Rare Species Centre that we reached the famous Lutyens/Jekyll collaboration at about closing time! I do have pictures and will be featuring this garden later this week since it has been restored and there is a wonderful story to tell, but for the moment, I'm happy to share the pictures that I took today at our first stop. It certainly made an impression on both of us and we had a wonderful day out. I, for one, will be returning soon, because the snow leopard is the most wonderful animal I've seen ... and my husband agrees.
Labels: Rare Species Conservation Trust Snow leopard sun bear