The garden at Gilbert White's House is a real surprise - a hidden treasure that rarely appears in garden guides - nestled in the heart of a perfect English village in Hampshire. There are no formal gardens here, just a lovely English landscape that leaves a lasting impression once visited. This was Gilbert White's home, a man who's painstaking records, published as The Natural History of Selborne (1788) - is one of the most re-printed books in the English language.
Gilbert White was born in the village in 1720, and died in the house that bears his name 66 years later. The house is actually called The Wakes, but is simply referred to as Gilbert White's House today. Nestled in the heart of Jane Austin country in the village of Selborne - which looks just like an English village should, with its thatched cottages and narrow High Street - Gilbert White was a skilled gardener, who grew not just fruit, vegetables and flowers, but also a huge range of crops in the open fields near the house - some 300 species - all recorded in his Garden Kalendar, from 1751-1767.
The house remained in private ownership until the mid 1950's and successive owners made considerable changes to the property and the gardens, so what's there today is a reconstruction of Gilbert White's garden and a testament to the famous naturalist and author. The gardens are tended by a team of volunteers known as the "Wakes Weeders" and it is only recently that an overall plan has been agreed for the long-term restoration of the garden.
There are no formal gardens here, although you'll find a charming "Six Quarter" garden, divided into six beds which is a showcase for the shrubs and plants mentioned by Gilbert White in his journals. There is also a wild flower garden, herb garden and kitchen garden. But most impressive and enjoyable is the large tract of parkland in front of the house, with the Wine Pipe walk (above). Gilbert White's original barrel seat, known as the Wine Pipe is long gone, but there is a replica in place today. The adjoining land is owned by the National Trust, so this is a view that's here to stay. 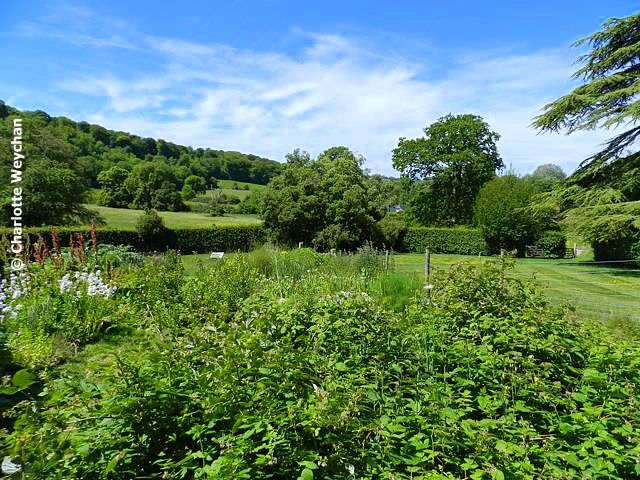 Notwithstanding White's formidable reputation, his house and garden are well worth making a detour for on a sunny day, if you want to wander through an idyllic English village and stroll through a lovely English garden with an interesting history. Close enough to Midhurst to combine with Woolbeding House if you're there on the right day of the week, or you could carry on see the roses at Mottisfont Abbey. Open daily during June, July and August from 10.30 am - 5.15 pm.
Labels: Gilbert White's House Hampshire Mottisfont Abbey Natural History The Galloping Gardener Woolbeding Gardens