When small is beautiful ... three cottage gardens to visit in a day

If you fancy a day out touring small gardens, you'll be hard pressed to beat the three featured here today in Kent and East Sussex - all have an interesting history and famous former residents, and the gardens, maintained by the National Trust, are delightful. Start with Smallhythe Place in Kent, former home of actress, Ellen Terry, which is famous for its roses. There's even a yellow rose named after her, but sadly it wasn't in bloom when I visited, although notices at the door claimed that it would be "blooming soon".
Located in Kent, which is known as the Garden of England, this is a wonderful destination for foreign visitors, because you'll be treated to stunning countryside en route to Smallhythe and a classic timber-framed house on arrival, which looks as higgledy piggledy as a witch's cottage in a fairy tale! Add a garnish of roses on the front facade, and I suspect you've got your classic English cottage idyll here!
Lamb House in Rye, has the largest lawn in town and a charming small garden. This was home to Henry James, the well-known American author from 1898 until his death in 1916. Although he was no great gardener, he enlisted the help of his friend Alfred Parsons, to create the one-acre garden that survives today. Rye is a fascinating town - one of the original Cinque Ports and filled with interesting architecture and cobbled streets. Many of the houses on the approach to Lamb House have charming flower displays and window boxes, and you're left with the impression that the whole town is filled with flowers.
The third small garden that housed a famous resident, and compliments the other two here, is Monk's House near Lewes, former home of writer, Virginia Woolf, who bought the house with her husband Leonard as a weekend retreat in 1919. The cottage garden here is charming and although it only extends to a little over an acre, it's filled to bursting with colourful perennials. It also has wonderful views over the South Downs and surrounding countryside. 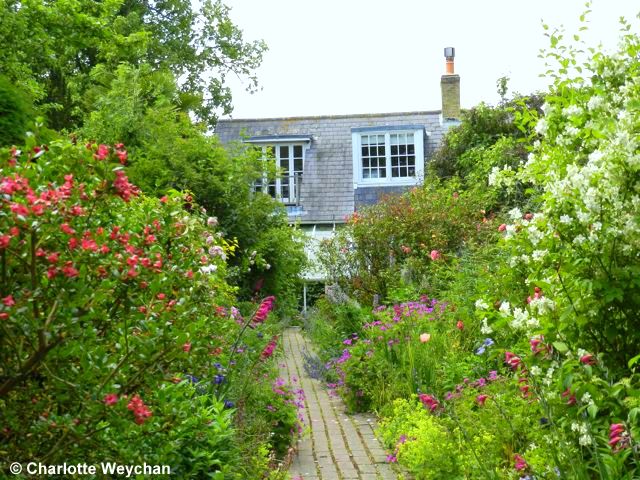 Virginia Woolf was part of the Bloomsbury set, and her sister, Vanessa Bell, lived at nearby Charleston, another delightful garden just a few miles away. Sadly, opening hours at Monk's House are very restricted, and it is only open for viewing on Wednesday and Saturday afternoons, although I did hear talk of extended opening hours when I was there at the weekend. All three of these gardens are visitable in a day and will take you through some of the prettiest countryside in southern England.
Labels: East Sussex Henry James Kent Lamb House Monk's House National Trust Small is Beautiful Smallhythe Place The Galloping Gardener Virginia Woolf