Little Malvern Court - catch it if you can this week!

Little Malvern Court - a former Benedictine monastery - perched on a hillside overlooking the Malvern Hills, has a wonderfully romantic garden surrounding a house that positively creaks with history! Parts of the 10-acre plot were redesigned by Arabella Lennox-Boyd of Gresgarth Hall in 1982, and further work was carried out by Michael Balston, who was involved in the redesign of the Gardens of the Rose, which I hope to visit this week.
The house has been home to the Berington family by descent since the dissolution of the monasteries in England in 1539. But it is the recent inhabitants who have taken on the restoration of the property and it was Tom and Olguita Berington who moved here in the 1950s from St Louis, Missouri, who brought in garden designers and restored the fabric of the ancient parts of the property.
The result is a fascinating house, which opens to the public for a short season in the spring and early summer and a garden that has been "decorated" close to the house as a series of rooms, and left to mature elsewhere on the plot. There are many fine trees here and several small lakes that have replaced the fish ponds that were here in medieval times. I'm told this garden is spectacular in springtime when all the bulbs are in bloom, but it was looking good in June when I visited too, with all the old-fashioned roses in flower.
Close to the house there are many immaculately clipped hedges and rose-covered pergolas, and clever use has been made of the hedging to draw you eye to other parts of the garden (above). Immaculately maintained and much use has been made of pale colours, which work really well against the large amount of hedging. There is also a horseshoe of pleached limes set around a lawn - so simple, but very effective! 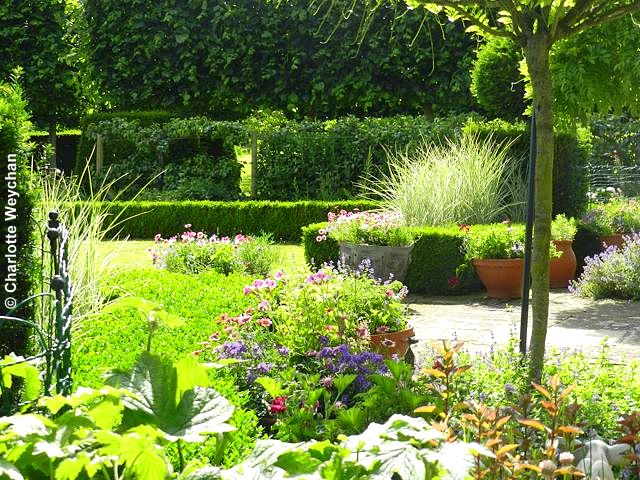 Definitely a garden to put on your Wish List if you're going to be in the area, but opening times are very restricted - Wednesdays and Thursdays only, from 2.15 to 5.00 pm (April to July only) and the bad news is that it closes its doors at the end of this week, so you may have to wait until next year. But for me this garden made a perfect dessert to those that had gone before - Hampton Court, which served as the starter and Hergest Croft, which provided the main course!
Labels: Arabella Lennox-Boyd Hampton Court Hergest Croft Little Malvern Court The Galloping Gardener Worcestershire