Trengwainton in Cornwall is about as far west as you can get in the UK before falling into the ocean! This delectable 25-acre garden enjoys some of the mildest weather in Britain and the planting here is, for the most part, sub-tropical. The result is a wonderful combination of exotics, which thrive in a micro-climate, alongside more traditional English plants, and an impressive walled garden. Visit like I did, late in the afternoon, and you might even be lucky enough to see a rainbow over Mounts Bay and beyond!
The fabulous walled garden is divided into five main areas, and boasts impressive magnolias in early spring; tempting fruit and vegetable displays during growing season; and dazzling autumn hues at this time of year in the form of multi-coloured pumpkins and late-flowering perennials. Combine this with the subtle autumn light and you'll have a veritable feast for your eyes and memories to record forever with your camera.
In the 19th century Trengwainton was home to a former Jamaican sugar-plantation owner, who planted trees here to protect the land from the ocean storms. But later it was acquired by the Bolitho family, and when Sir Edward inherited the property in 1925, the garden underwent a huge transformation. He sponsored one of the many fashionable plant-hunting expeditions of the early 20th century - a young man called Frank Kingdon-Ward, who went to Assam and Burma in the late 1920s.
Bolitho's reward was many of the exotic species that survive at Trengwainton today and during his 35-year reign at the property he also had the foresight to realise that the unique south-east facing position of the garden lent itself to cultivating species from around the UK too. Today the garden is home to a fantastic collection of ferns, palms, rhododendrons, magnolias and azaleas, which guarantee year-round interest for the visitor.
In 1961, Bolitho gave much of the land to the National Trust, and although his descendants remain in the big house, the NT uses this site to test new plant species for hardiness. The result is an interesting collection, and unlike so many other gardens in Cornwall, that remain heavily dependent on the main tourist season, Trengwainton stays open throughout the year. Part of the charm of the property is the focus on exotic scarecrows throughout the walled gardens, like the funky frogman above! 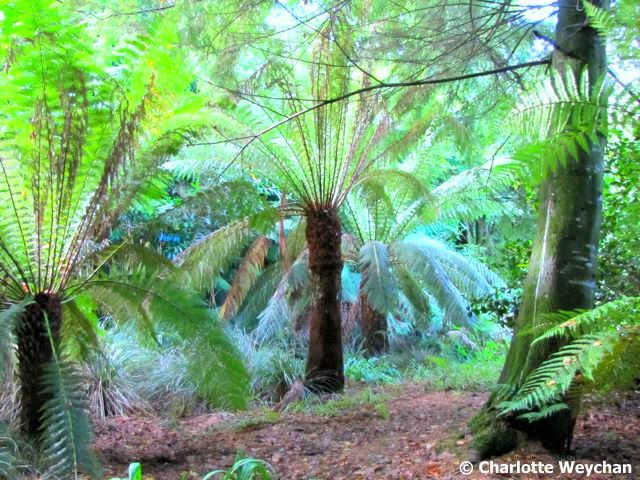 If you get this far down in Cornwall, you might even consider a trip to the Scilly Isles where the garden at Tresco Abbey awaits you. I didn't make it because the weather turned bad, but I did get to visit another of my favourite English gardens - Tremenheere Sculpture Garden - which has equally spectacular views over Mounts Bay and St Michael's Mount.
Labels: Cornwall Tremenheere Sculpture Garden Trengwainton Walled Gardens