I featured Borde Hill earlier this month when writing about spring garden walks in Sussex and then realised that I hadn't visited for two years. So as Mother's Day dawned, I left everyone sleeping at home and headed off to see how the garden was looking early in the season. I'm glad I did, because the sun was shining and the garden was looking glorious - with a fantastic display of camellias, early-flowering rhododendrons and magnolias - and the promise of what's to come later in the season.
The Tudor mansion (above) which lies at the heart of the estate, was built in 1598, and has, for the last  four generations been inhabited by the Clarke family. The garden dates back to the late early 19th century, when Colonel Stephenson Clarke (like many other local landowners) sponsored some of the Great Plant Hunters' expeditions to the Far East and South America in his search for rare and unusual plants to grace his estate. His efforts are reflected in the large number of Champion Trees that survive at Borde Hill - one of the largest private collections surviving in the UK - with more than 70 specimens.
Most noticeable at this time of year are the early-flowering magnolias, which are simply stunning. And considering how early in the season it is, there's already a blaze of colour at Borde Hill, with many camellias in bloom, rhododendrons, daffodils, helebores, remains of the snowdrops and even some tulips in bloom in the Azalea Circle!
One of the most striking features of  Borde Hill is the undulating parkland surrounding the property and the fine views over the Sussex Weald. There is more than 200 acres of National Heritage Grade II listed parkland, providing wonderful walks for visitors. The house is carefully positioned to maximise on the views and is surrounded by 17 acres of private gardens divided into a series of carefully-planned areas, including an Italian, Mediterranean, Rhododendron and Rose garden. And then at the far reaches of the property there are camellia and azalea rings which provide glorious colour displays early in the visiting season.
The Clarke family have worked hard to turn this into a truly spectacular garden during the last ten years and spent both time and money improving facilities at the property. Gone is the basic entrance hut, and today you will find an impressive entrance. They have also strived to provide year-round plant interest at the property and the Rose Garden, which was  re-planted in 1996 and then re-arranged to provide a more harmonious colour palette in 2011, promises to be spectacular this summer. 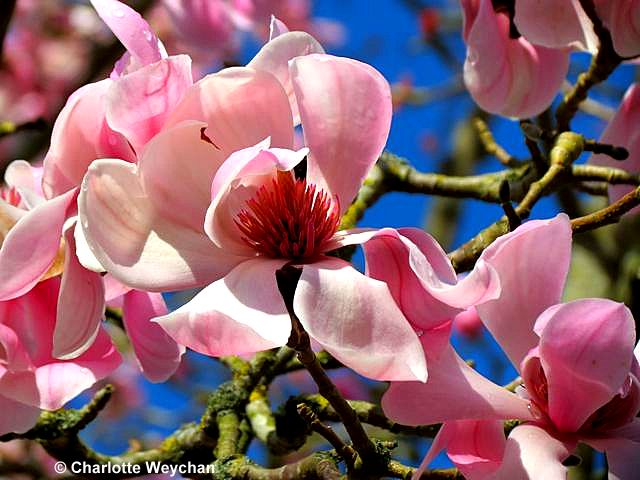 Now is the time to see magnolias and camellias. April and May herald impressive displays of azaleas and rhododendrons, and the bluebells appear later in May. Visit from June to September and you'll find the Rose Garden in bloom, together with colourful borders. I'm glad I visited today and plan to return later in the season to see how the garden is looking. It's well worth checking the Borde Hill website to see what other events are on.
The garden is open daily until late autumn, from 10.00 in the morning and cost is £8.00 for an adult and £5.00 for a child. Family tickets (2 adults and 3 children) cost £25.00. Members of the Historic Houses Association visit free.
Labels: Borde Hill Champion Trees Historic Houses Association Spring gardens The Galloping Gardener West Sussex