You've got to hand it to Lady Ursula Cholmeley - she's got courage, stamina and a project in progress that would make most of us tremble at the knees - the restoration of Easton Walled Gardens in Lincolnshire. Family home of the Cholmeleys since 1592, the house that used to stand on the site - Easton Hall - was pulled down in 1951. It was requisitioned at the start of World War II, but the soldiers stationed there caused so much damage to the property that restoration was not an option. Eye witness reports of their occupation tell of constant gunfire within the house and grenades being lobbed into the greenhouses!
The 12-acre gardens were left untouched after the demolition and it was only in 1999 that a plan was hatched to revive them. Ursula has completely embraced the challenge of restoring this wonderful landscape and remains calm, serene and most importantly, hugely enthusiastic about her work. With vistas and architectural features like these, who wouldn't be daunted by the prospect of bringing these ancient gardens back to life? But Lady Cholmeley is the most unassuming member of the aristocracy I've met and refers to herself as "custodian" of the gardens, rather than owner. And she's totally committed to her project.
President Roosevelt stayed here and described the garden as "a dream of Nirvana ... almost too good to be true". His parents were friends of the Cholmeleys and he spent part of his honeymoon here with his new wife Eleanor in 1905. But neither he nor the Cholmeley family could have foreseen the tragedy that would befall Easton in the next fifty years, after two wars and a half century of neglect. Today the only surviving buildings are the gatehouse and stableyard, which have been restored to provide a shop and restaurant, and the original architectural features of the garden remain including steps, walls and bridges.
Work began at Easton in 2002 and now, ten years later, there's plenty for the visitor to see, not just in terms of ongoing restoration work, but thanks to the new cottage garden, turf maze, borders and meadows that are permanent eye catchers. Visitors come from all over the country for the annual Sweet Pea Week (1st - 8th July this year - open daily from 11.00-16.00). But the garden you see today has come a long way from the completely overgrown jungle that faced the Cholmeleys on day one. As recently as 2000, you couldn't walk through the gardens at all because they were covered with brambles!
Easton Walled Gardens are open throughout the season Wednesday - Friday and Sundays, from 11.00-16.00. Admission is £6.25 for adults and £2 for children. Other gardens nearby include Grimsthorpe Castle and Barnsdale, but you will need several hours to savour the 12 acres here. You can't avoid being infected by the pervading sense of joy here, as new life is breathed back into these ancient gardens. Definitely one to watch and re-visit regularly as work progresses. 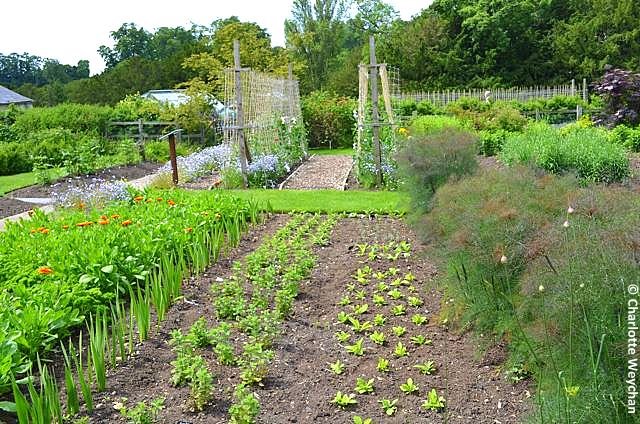