Hidcote Manor Garden - Paradise Lost and Found in the Cotswolds

When I first visited Hidcote Manor in Gloucestershire several years ago on a hot summer morning in June. It was nothing short of a nightmare! The car park was heaving with coaches, it was over-run with visitors and I came away feeling that I'd been short-changed at a garden theme park ... hustled, bustled and shoved out of the way by foreign tourists desperate to immortalise Lawrence Johnston's iconic Cotswold garden on their memory cards. But if you consider that Hidcote and Sissinghurst are to England, what Giverny and Villandry are to France in terms of drawing garden visitors, it is not surprising. So try and arrive late in the afternoon, as I did this time, at the tail end a rainy day and you might find it more appealing.
Hidcote has undergone a huge transformation and reincarnation during the last decade, under the stewardship of the National Trust and a committed team of gardeners headed by Glyn Jones. Regarded as one of the most influential 20th century gardens in Britain, it was created by a passionate gardener - Lawrence Johnston - who was no more than an amateur when he arrived in Gloucestershire in 1907. But he became extremely skilled during the 40 years that he lived and gardened here. It was the first property given to the Trust exclusively as a garden, but during the next fifty years of their "parenting", it lost much of the original spirit in which it had been created.
As the Millennium approached, a decision was made to restore the garden to the way it was when it was when given to the Trust in 1948. Twelve years and £3.5 million later, Hidcote is back on the map looking the way it did when Johnston left it. The 300-acre estate at Hidcote Bartrim, was originally purchased by Lawrence's mother, Mrs Gertrude Winthrop in 1907, but she had never envisaged a garden here because she was more interested in being lady of the manor. Fortunately, her son had different aspirations and he reclaimed 10 acres from the estate to create the garden that is there today.
Hidcote occupies an unlikely position for a garden of this stature, because it sits on top of a hill overlooking the Vale of Evesham. There was nothing here but fields when Johnston arrived with his mother and the garden rooms were born - using walls and hedging - as a result of his endeavours to provide protection to his ever-growing plant collection. Little has ever been published about him, although he was an ex-patriate American who settled here and fought for his new homeland in both the Boer and First World Wars. He was known as the quiet American, and was the son of a wealthy Baltimore family.
Fortunately for modern visitors, it appears that Lawrence Johnston was an early 20th century plant "geek". He was obsessed both with his garden and plants and travelled widely collecting plants during the 1920s. But equally fortunate was the extent of his mother's wealth, because it would have been impossible to have amassed such a fine collection of plants in those post-war years, without considerable financial backing. He also acquired his second garden property in the roaring 20s - Serre de la Madone - in the South of France, near Menton, and used this as the home for plants that could not survive the English climate. He later retired there because of ill health and today, that garden is also being restored.
With little gossip and nothing more than a couple of letters and diaries left behind by Lawrence Johnston about his life or his garden, it is hard to know where he acquired his sense of design. It has been suggested by Anna Pavord that he was influenced by the emerging Arts and Crafts gardening movement, spearheaded by Edwin Lutyens and Gertrude Jekyll. His close neighbour and friend, Mark Fenwick lived at Abbotswood nearby, and he had plans drawn up by Lutyens for his own garden in 1902. And although Hidcote does not bear the normal hallmarks of the era in terms of pergolas, terraces, urns and ornaments, the massed planting style does.
The restoration project undertaken by the National Trust at Hidcote has breathed new life into a property that was beginning to look somewhat sad and dishevelled at the end of the 20th century. Fortunately the Trust has had the vision to recreate this important property and restore the original planting plans in the various garden rooms.

Although the garden covers only ten acres, there are 28 different garden areas here, each with different themes, ranging from the White Garden to winter borders, the magnificent newly-restored Plant House to a Poppy Garden, and the Bathing Pool garden, where the water changes colour according the seasons, ranging from an icy blue in winter, to the vivid green of high summer. But the master plan is more complex even than the number of garden rooms because to the south of the manor, the different gardens are all on different levels, with paths winding through them and a staggering array of secret entrances through topiary dividers.
There is no preferred route around Hidcote - you find your own way through the gardens and try not to miss anything, although a single visit will never be sufficient to take it all in. To the north of the manor, there is a very different feel to this garden, and the magnificent restoration and rebuilding of Lawrence Johnston's famous Plant House is a credit to the National Trust and the plantsmen who keep this garden alive. But whichever route you take, try not to miss anything - there are many hidden corners at Hidcote. You have to start south of the manor because the entrance is through the house, but it's easy to get diverted and miss the north part of the garden.
To the north of the manor house you'll find the magnificent Rose Walk, ablaze with colour in high summer; and the welcome shade of the Plant House, filled with exotic plants, overlooking the lily pond, as well as the Kitchen Garden, filled with tempting produce. Elsewhere in the garden, the Rock Bank (above) has also been restored, and although it is early days, given all the replanting, this will come into its own as it matures. Also worth remembering about this garden, is that a change in the seasons will bring about a change in the look of the garden, because it was originally planted to ensure that there was always interest, even in the harsh winter months. 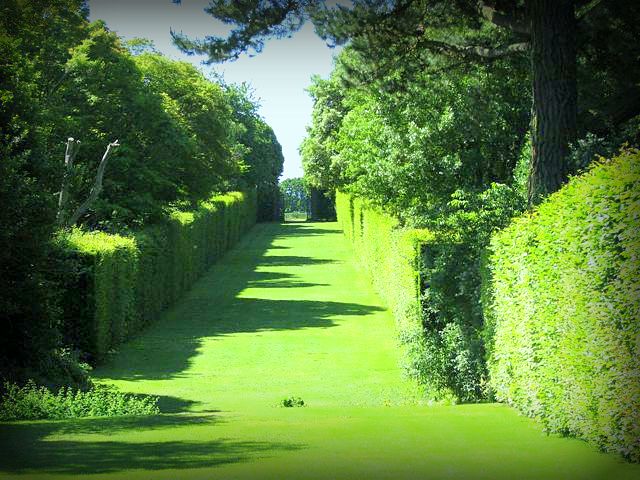 Hidcote is open every day throughout the spring and summer months (April to end of September), from 10.00-18.00. Best times to visit are as it opens or later in the day, if you want to enjoy the garden without too many visitors. Entrance is £10.45 for adults (free to National Trust members). Do make sure you don't miss Kiftsgate Court on the other side of the road if you make the pilgrimage to Hidcote Bartrim.
Labels: Cotswold Gardens Gloucestershire Gardens Hidcote Manor Lawrence Johnston National Trust Serre de la Madone The Galloping Gardener