Walk with wildfowl at the London Wetland Centre - a November treat!

Today was one of those beautiful, clear and chilly November days, so what better place to explore this afternoon than the London Wetland Centre in Barnes? This is one of nine English sites managed by The Wildfowl and Wetlands Trust (WWT), originally founded in 1946 by Sir Peter Scott. The site is an extraordinary achievement - 42 hectares of of wetlands - located in south-west London and home to both resident and visiting birds throughout the year. It's a wonderful place to walk on a sunny day and a fascinating place to take the children, because you can get close enough to the winged residents to really enjoy them.
You couldn't get much better viewing conditions than today - clear blue skies, reflected in the huge blue water pools that make up the wetland setting, with fine views over the capital. But you wouldn't know you were so close to the city centre, because all you can hear are the calls of the birds and the odd metal wings beating their way towards Heathrow Airport. The site was formerly owned by Thames Water who used the former reservoirs to supply drinking water to the local community, but an ambitious project involving Thames, the WWT and a property developer, ensured that the site was secured as a Wetland centre for both man and nature to share and enjoy.
Work began on the site in 1995, just a few years after Sir Peter Scott had died. The reservoirs were transformed into lakes, pools and marshes, reed beds and wet fen meadows, each connected by sluice gates, but providing a constantly flowing water supply. By 1997 the landscaping and engineering work was completed and planting begun - in the next few years more than 300,000 aquatic plants, 25,000 trees and hundreds of rare native bulbs including fritillaries and marsh orchids were planted. And today, the site is unique not just for its wildfowl and visiting birds, but also its plant life. It was officially opened by Sir David Attenborough in May 2000.
Bird lovers come here for the wildfowl - both resident and migrant - and the Centre has been designated a Site of Special Scientific Interest (SSSI) because of the huge numbers of shoveler and gadwall duck that spend the winter here. There were certainly many bobbing tails when I visited today. But elsewhere there is plenty of interest for garden lovers too, as the trees begin to mature and the plants provide year-round interest. There is also a sustainable gardens exhibit featuring three separate designs, all exploring the concept of sustainability, including the Slate one below.
The London Wetland Centre is open daily throughout the year (except on Christmas Day) from 09.30-18.00 in the summer months (April- October) and from 09.30-17.00 in the winter (November-March). Admission is £9.99 for adults and £5.55 for children, aged 4-16 (under four's go free). Annual membership of the WWT is £37.00 which gives free admission to all nine centres nationwide - well worth considering if you're an avid bird watcher! 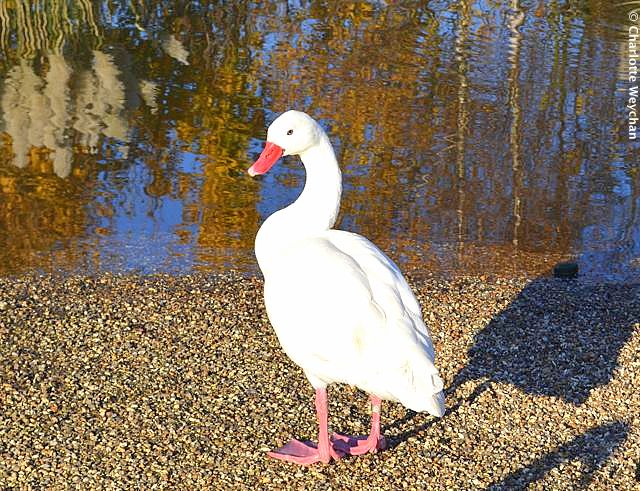