A sortie into three Somerset gardens - Barrington Court, Lytes Cary and Tintinhull - compact enough to see all in a day!

There's a little corner of Somerset that has more than its fair share of gardens, so for a blissful and bucolic day out, head to Ilchester and seek out the charms of three National Trust properties that form a triangle at the south-western edge of the county. Each garden is small enough to savour and you'll comfortably visit all three in a day, but make sure you avoid Monday or Thursday if you're planning to see all of them.
Start out at Barrington Court - a huge Tudor house, set in 11 acres of grounds - with a fine 20th century garden, commissioned by Colonel Lyle, who took a tenancy of the house from the National Trust in 1920. He commissioned Gertrude Jekyll to help with the planting at the property, although she never actually visited the garden because of her advancing years and failing sight. But it is still considered to be one of the finest examples of her work, even though much replanting has been done in the last two decades.
The original Tudor house (open to the public) is surrounded by lawns and parkland, bounded by a moat, but there is also a later addition to the property dating back to the 17th century, known as Strode House, which sits at the heart of the formal gardens, including the Lily and White gardens and the Pergola Walk. The Kitchen Garden is another striking feature here and is always popular with visitors,  although the ravages of last winter, combined with a late spring, mean that both flowers and vegetables are running behind.
For a smaller and more intimate property just a few miles away, head for Lytes Cary. This has long been one of my favourite Somerset gardens that I make a special effort to visit when passing through. The combination of the charming forecourt garden (above) with its dumpy yew topiary and a colourful three-acre Arts and Crafts garden with splendid borders and many hidden nooks and crannies, make this very different from the more formal gardens at Barrington Court.  But do remember that it's closed on a Thursday. For a full review and more pictures click on the link above. 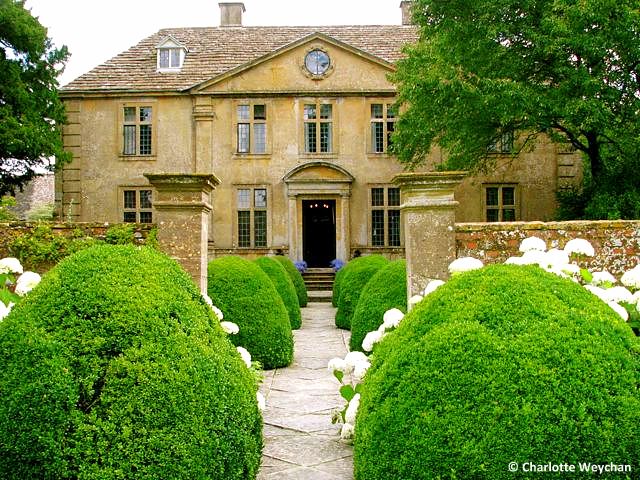 The third must-see garden in this Somerset trio is Tintinhull House where a glorious 17th century stone village house overlooks a series of garden rooms, originally created by former resident Phyllis Reiss, who arrived here in 1933. Well-known English garden critic, Patrick Taylor, says: "It is in essence like a miniature Hidcote or Sissinghurst in the way in which a harmonious sequence of spaces, often with strong architectural features, is embellished with carefully thought-out planting." 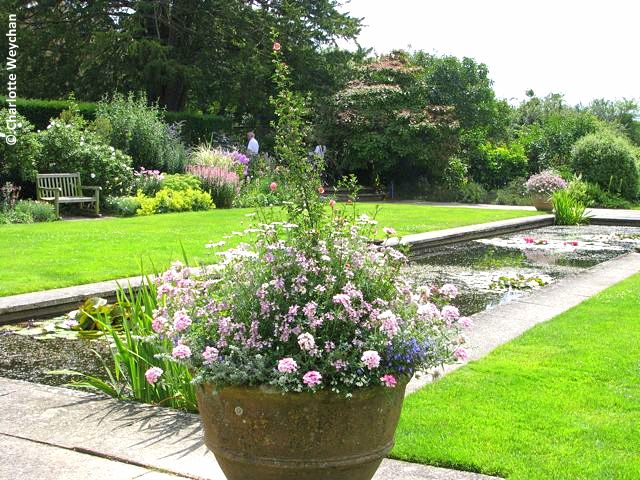 In the 1980's Penelope Hobhouse came to live here and made her own stamp on the two-acre property with her detailed planting schemes, which still form the backbone of the garden there today as plants are reaching full maturity. Part of the charm of Tintinhull is the way that each part of the garden leads into the next and you are enticed through doors and gates from one room to another, giving a deceptive illusion of size.
All three properties are owned and operated by the National Trust and are free to members. Barrington Court is open daily, Lytes Cary is open every day except Thursday and Tintinhull is shut on a Monday. Driving distances between each property are short and each garden is so different, that it's well worth making the effort to see all three if you're in the area.
Labels: Barrington Court Gertrude Jekyll Lytes Cary Penelope Hobhouse Somerset Gardens The Galloping Gardener Tintinhull