In my first garden foray to Northamptonshire this week, I was able to visit two very different, but highly-prized properties within a stone's throw of each other - Coton Manor and Cottesbrook Hall. But I confess it was more by luck than good judgement that I managed to see both on the same day, because the latter has extremely restricted opening hours and after a serious wrestle with the M1 that was gridlocked for much of the journey, I had chosen the only day of the week that both are open at this time of year - a Thursday.
Coton Manor and the land surrounding it, has been nurtured by the same family for nearly a century. The result is a mature garden, with many specimen trees, where successive generations have capitalised on the setting - with fine views over the surrounding countryside - and the architecture of the 17th century stone manor house to provide an interesting backdrop to what is obviously a private garden. And although some 30,000 visitors come here every year, the garden retains a sense of intimacy that is often lacking in gardens that open regularly to the public.
Ian and Susie Pasley-Tyler moved here from London in 1991, when they inherited the property from his parents. They knew nothing about gardening, but during the last two decades they've embraced their 10-acre plot and Susie now works tirelessly with her team of gardeners to provide colour and interest throughout the seasons. Visitors start arriving here for the snowdrops and hellebores in February, and continue to visit until the end of September when the late summer borders are still in bloom.
On arrival at Coton visitors wind their way past the honey-coloured house to the terraces which face south - the wisteria here is spectacular early in the season, as are the roses in the early part of the summer. But there is still plenty to see in late summer and by August many of the late borders are in bloom. Elsewhere in the garden you will find an orchard with its water staircase (above), a bog garden, woodland garden (famous for its spectacular bluebell displays in May) and, in high summer, a magnificent wildflower meadow. 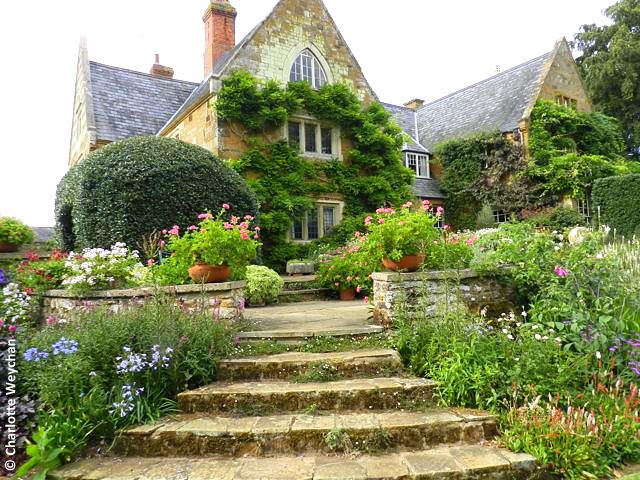 Coton Manor opens for two weeks in February for the snowdrops, but the main season is from Easter until the end of September, from Tuesday to Saturday and also Bank Holidays and Sundays in April and May from 12.00 -17.30 (last admission 16.45). Adults £6.00 and children £2.00. There is also an excellent nursery and it's well worth checking the Coton Manor website for details about garden courses that are run on site. Each year a selection of well-known gardening worthies share their knowledge with students here.
For more summer gardens to visit, click here.
Labels: Best British Gardens Coton Manor Coton Manor Garden School Northamptonshire Gardens The Galloping Gardener