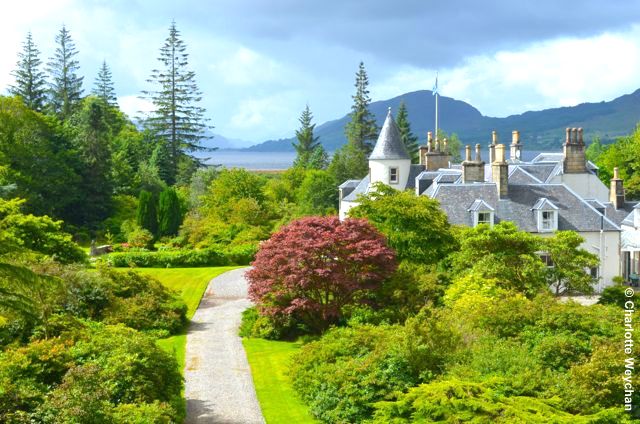 Attadale Gardens are situated overlooking the island of Skye at Strathcarron in Scotland and as soon as you walk through the gates you realise this is a very special place. The position of the property close to the Gulf Stream and the shelter from northern winds provided by the surrounding hills means that these are incredibly lush grounds, with a semblance of the tropics about them and a unique garden cherished and re-created by Nicky Macpherson and her husband Ewen since the terrible gales of the 1980s.
Ewen Macpherson's father, Ian, bought the property in 1952. Previous owners had included Baron von Shroder, who had a real interest in trees and plants and imported many fine redwoods from overseas, as well as a substantial collection of rhododendrons, which flourish in the protected microclimate here. But it is Nicky who created the very personal garden at the house today, with help at the outset from Michael Innes, who had trained at Kew and the late Professor Douglas Henderson, who was formerly in charge of Inverewe Gardens.
When you arrive at Attadale, you have the chance to meander down the drive through the water gardens, to be enjoyed at both ground level with all the magnificent reflections and from above, by walking along a winding path that leads to a viewpoint over the main house and the sea beyond. You will find huge gunnera plants in this part of the garden, imported from Brazil and the Magellan Straits, as well as a carefully chosen palette to give colour throughout the seasons, a waterfall and several small bridges that tempt you back to ground level.
Closer to the house you have the symmetrical Sunken Garden (above), surrounded by old walls, with another palette of carefully-chosen plants to ensure interest from April to October - astrantia, sedum, heuchera and rosa rugosa to name but a few - and with fine displays of bulbs early in the season. From here you wander across to a huge sundial supported by the Macpherson cat, and then through a wooded area to the peaceful Japanese Garden, which features a selection of traditional Japanese plants including bamboo, azaleas, cherry and maple, as well as miniature conifers.  The rhododendron dell stretches away up a hill beyond the old wood adjacent to the Japanese Garden (above). Remember to look up at the fine Californian redwood (Sequoia sempervirens) and the wellingtonia (Sequoiadendron gigantum),  as you walk through here. And although the rhododendrons were not in flower when I visited, it is easy to imagine the fine colour displays in springtime - a veritable legacy from Baron von Schroder's days, but added to by the present owners.
The Fernery, completed as recently as 2012, may come as a bit of a surprise as you emerge from this part of the garden - you will find a mini geodesic dome, resembling those at the Eden Project - designed to protect the plants that would not survive the harsh winter climate here. Many of the plants you see outside were given by a great friend of the Macpherson family, the late Peter Hainsworth, who loved this part of the garden. And head gardener, Geoff Stephenson, who arrived at Attadale in 2003, has also made a huge contribution to the collection by propagating ferns from outside gardens and various expeditions.
The kitchen garden (above) close to the house, is an impressive working area, with gravel paths and raised beds, which produces fruit and vegetables for both the main house and some local restaurants. Joanna Macpherson, Nicky's daughter, who also plays a major role in the garden today, credits both productivity and organisation of this part of the garden to head gardener Geoff, but having met Joanna and her mother, I suspect that they too, with their boundless energy, have made a major contribution to what you see there today. 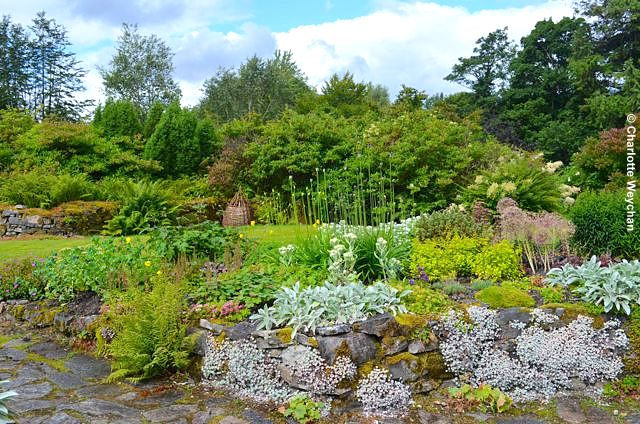 Attadale's charm is indisputable, wherever you are in the garden. It is impeccably kept and filled with interesting plants and vistas, but most noticeable is the sense of calm and serenity here. Well worth making the effort to see and open daily, except Sunday, from April to October every year, 10.00-17.30. Admission is £6.00 for adults.
Labels: Attadale Best Scottish Gardens Nicky Macpherson Scottish Gardens Sculpture Gardens The Galloping Gardener