I had never heard of Herterton House before I headed north recently and only then discovered it because I happened to visit the walled garden at the nearby Wallington Estate in Northumberland. Both are within spitting distance of Cambo, birthplace of Capability Brown, yet you rarely see anything about either of these gardens in the press and I would never have found them, but for being told about them by friends in the vicinity.
Herterton House Gardens will come as a delightful surprise to anyone who visits them. Hailed by well-known British garden writer, Robin Lane-Fox, as “one of the most influential English gardens to be created since the end of World War II”, they have been created by a husband and wife team, Frank and Marjorie Lawley, over the last 40 years since taking on the lease of a run-down National Trust property in 1975.
They have renovated both house and garden during their tenancy and created an extraordinarily varied landscape in less than an acre, but with five very different garden rooms and a range of plants that will astound any visitor. Marjorie Lawley was brought up in the area – her father was a stonemason on the neighbouring Wallington Estate, with its famous walled garden. Frank came from Staffordshire, and before moving into Herterton, they had a cottage at Wallington, where they first discovered the joys of gardening.
The garden here is wrapped around a 16th century stone farmhouse and the Lawleys have made use of each different aspect of the adjacent land, so that every part of the garden enjoys different views. At the front of the property is the Formal garden, filled with topiary in shades of green and gold, and far-reaching views over the Northumberland countryside; then to one side of the house is a Physic Garden, and at the rear there are three different garden rooms, known as the Flower, Fancy and Nursery gardens. At the far-end of the property, there is a stone gazebo, built by the Lawleys, which gives wonderful views and enables visitors to fully-appreciate the design of the  gardens below.
It doesn't matter where you start at Herterton, to the front or rear of the house, because you'll be enchanted by the different rooms and the range of plants here. The Fancy garden (above) is accessed through the Nursery garden and leads into the Flower garden adjacent to the house. Climb the steps into the gazebo to get a bird's eye view of the different gardens and you will really appreciate the skill of the planting and the use of space here. 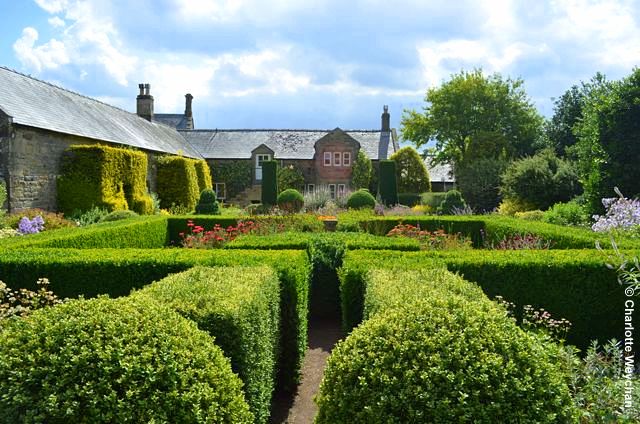 There was nothing here when the Lawleys arrived in 1975, just a ramshackle farmhouse needing a lot of repairs and a completely blank canvas around the house, with a few outbuildings. Frank and Marjorie had already learned about gardening at their previous cottage on the Wallington Estate, but this was a very different prospect. Forty years later, this charming garden is a colourful tapestry of plants and you'd be forgiven for thinking you'd stepped into a landscape steeped in history.
Walk to the other end of the garden and you can climb more steps to see what lies below - this gives you a good view of the Flower garden, planted with many different herbaceous plants, interspersed with more topiary. Winding paths lead you through this part of the garden, which changes colour as you wander through it. You'll find many yellows, close to the house, orange and blue in the centre, surrounded by geometric topiary and rich reds and purples close to the gazebo, inspired by the paintings of Klee and Mondrian.
The Physic garden surrounds an old granary building with fine Northumberland arches (above) and is planted with a very different palette, featuring many medicinal plants in intricately-shaped beds. Overlooked by two sides on the house, this has a very different feel to other parts of the garden and is much more minimalist in its planting. 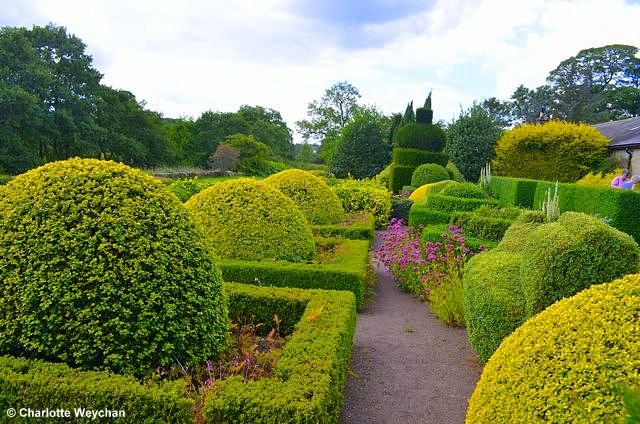 The Formal garden (above) is located at the front of the house and features finely clipped topiary shapes in green and yellow - a perfect compliment to the hues of the stone farmhouse that has been the Lawleys home for 40 years. Herterton House is open daily from the beginning of May until the end of September, except Tuesdays and Thursdays, from 13.30 to 17.30 and admission is £5.00. Definitely worth making the effort to see and, if you can, combine it with nearby Wallington. 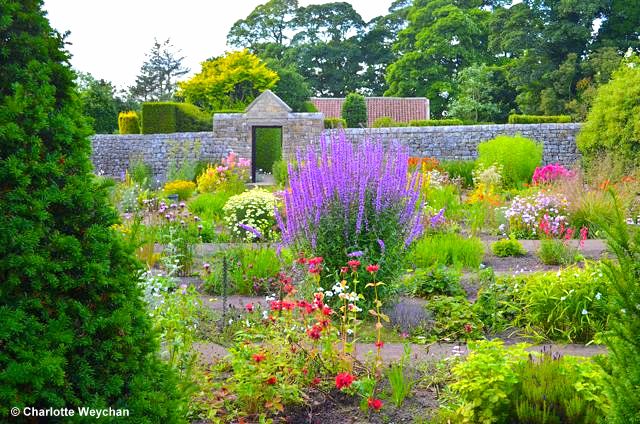 Frank Lawley, who is now approaching 80, has written a book about the garden he has created with Marjorie over the last 40 years: 'Herterton House and a New Country Garden'. It's a well-written account of what they have learned in their time here and gives a real insight into the creation of the garden.