In the heart of Richmond, Yorkshire there's a secret garden that's quite exceptional, but first you have to find it! Hidden behind a grey door in a small street opposite Barclays Bank is a magical garden created by the owners of Millgate House - a sumptuous bed and breakfast, famous for its morning meal - and a sheltered walled garden chosen from more than 600 for inclusion by Alan Titchmarsh in his popular television series, 'Britain's Best Back Gardens' earlier this year.
Owners Tim Culkin and Austin Lynch moved here in 1980 and started creating the garden within the ancient boundary walls of the property. Their B&B ranks Number 1 in Richmond, offering a peaceful haven to guests at the end of a day's sightseeing in Yorkshire and instant access to the green sanctuary beyond, but few people realise the garden is open daily to non residents from April until October, daily 10.00-17.00. And it's definitely one to put on your 'Wish List' if you're in the area.
Once through the grey gate, you walk down a narrow corridor, known as a 'snicket' in this part of the world and then another gate leads into the garden and the magical world beyond. Small terraces, steps and paths wind through the garden which is laid out on two different levels and designed to give colour and interest throughout the seasons. It's hard to believe you're at the heart of a bustling town here and the only noise comes from the tumbling waterfalls on the River Swale nearby.

Richmond is a charming Yorkshire Dales market town steeped in history, perched on top of a hill and dating back to the 11th century, when a community grew up around the castle. You can see both the ancient castle above and the fast-moving River Swale below from the garden at Millgate, plus the green landscape beyond from various vantage points at the property. Guests in rooms overlooking the garden enjoy particularly fine views from their windows of both the garden below - laid out like a tapestry - and the countryside beyond.

Gravel paths wind through the garden and a profusion of plants cover every inch of available space - notably clematis, hostas, roses and ferns as well as a treasure trove of perennials, shrubs and topiary. This is a wonderful plantsman's garden that thrives on the Yorkshire weather, behind sheltered walls, with carefully placed tables and chairs, allowing guests and visitors to savour time there.
Garden lovers will be amazed by the variety and density of planting and rose enthusiasts will certainly be in heaven during June and July as there are well over 40 varieties on show. Particularly charming is the area at the far end of the garden, where there is an ancient stone building (below) virtually hidden by the plants surrounding it. But make sure you stop and admire the garden from the various vantage points, because only then will you appreciate the skilful planting here.
Yorkshire has many fine gardens, but this one is truly worth making a detour for. And if you want to base yourself somewhere for a tour of the area, you would do well to see if you can stay at Millgate House. But you will have to book well in advance because it has become even more popular since appearing on Alan Titchmarsh's show. If you are coming this far north, make sure you drop in at York Gate on the way, because this is another remarkable garden. 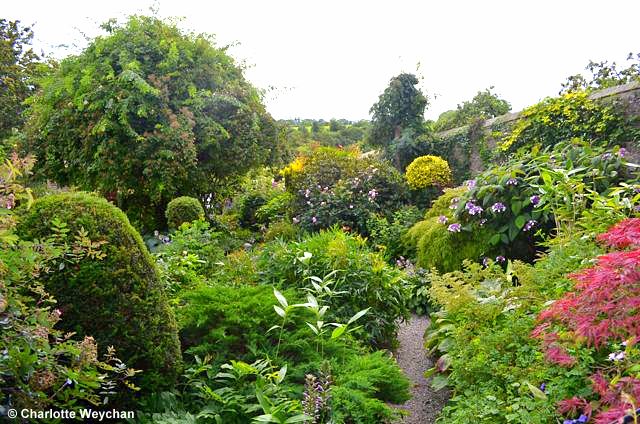 Millgate House is an RHS Partner Garden and also a member of the Historic Houses Association, but it still remains one of Yorkshire's best-kept secrets. I was amazed by what I saw here and would thoroughly recommend a detour to see it. Definitely worth basing yourself at the house (but book well ahead to guarantee a reservation) to look at gardens in the area.
Labels: Garden Bed & Breakfast Millgate House Richmond Secret Gardens The Galloping Gardener Yorkshire Gardens