With another Christmas behind us, I'm back on the garden trail looking at places visited earlier this year. There were certainly some striking "G" gardens on this list, starting with the Gibberd Garden in Essex - former home of architect Sir Frederick, who created a peaceful haven here with two subsequent wives and filled it with both architectural icons (including pillars that once adorned Coutts Bank in the Strand) and modern pieces acquired during his marriages. Definitely worth going out of your way to visit and easy to access from London if you fancy a day out.
Gilbert White's House in Hampshire proved to be a real surprise, with its interesting history and charming garden. White had a passionate interest in both plants and wildlife and spent his life recording what grew in his garden. The house is located in the heart of Jane Austen country, but is often omitted from garden guides, so one to remember if you're in the area, because part of its charm is the wide open spaces. Definitely not a "gardened" garden, but filled with interesting ideas.
Great Fosters had been on my visiting list for several years, but it was the sculpture rather than the garden that stuck in my mind following my foray there last summer. The garden is a fine example of the Arts & Crafts style, but is really there for the enjoyment of hotel guests, rather than visitors, so when a collection of modern sculpture went on show last summer, I made a beeline for the property. For full details click on the link and you will even see Marilyn Monroe in a different light!
Further afield in Essex and worth combining with the Gibberd Garden if you're in the area is Fiona Edmond's garden at Green Island - a wonderful triangular creation filled with interesting greenery and a sense of abandon. Owner Fiona, created this garden when she was recovering from ME and has continued to develop it since her return to good health. This is definitely a garden on the rise and I suspect that we'll be reading a lot more about it in both gardening guides and glossies in years to come.
Determined to see Gresgarth Hall - the garden created by well-known British garden designer, Arabella Lennox-Boyd - I headed north to Lancashire early in the year and embarked on a memorable garden tour of the area, while catching Arabella's icon on one of its early season open days. This garden is a riot of colour in May and draws huge crowds on open days, but is certainly a plantsman's paradise and will give you plenty of ideas for your garden at home. Check the Historic Houses Association website for details of openings in 2012. 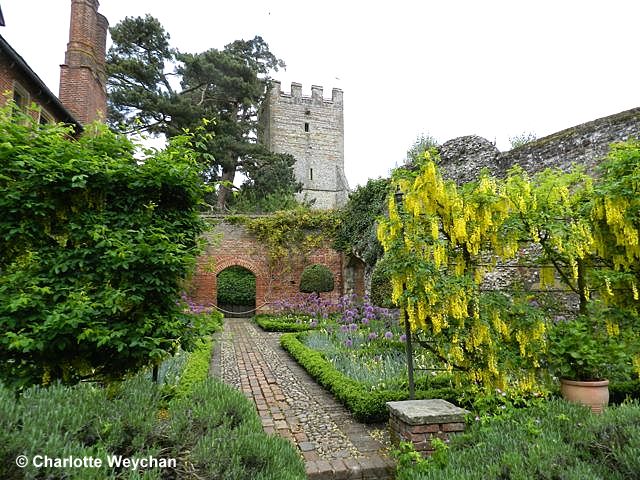 Greys Court near Henley in Oxfordshire is run by the National Trust - a small, but interesting property in the heart of the Chilterns - renowned for its rose garden and dwarfed by an interesting collection of ancient buildings. Located in the heart of fine garden country, this is one to combine with some of the other greats in the area including Cliveden.
Labels: Gibberd Garden Gilbert White's House Great Fosters Green Island Gardens Gresgarth Hall Greys Court